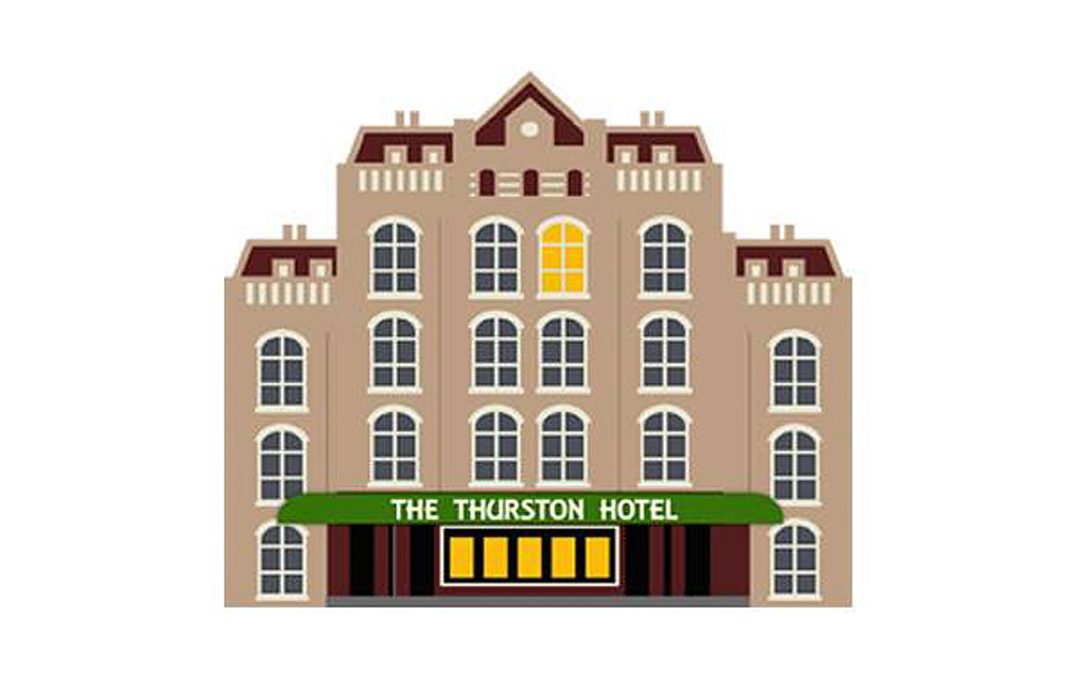 The 100-year-old Thurston Hotel is located on Main Street in Harmony, Alberta, Canada.

It’s a fictional name for a little town (population 12,000 permanent residents) nestled in the foothills of the Canadian Rockies, just outside the gates of Banff National Park. You get there by travelling west from Calgary on the Trans-Canada and it takes about an hour.

No, Harmony is not really Canmore, Alberta . . . but that’s what I think of when I think of Harmony.

The town hosts tourists from everywhere in all seasons of the year, but there are two high seasons: summer and winter. In summer, tourists come to hike or mountain bike or raft down the Kananaskis River. In winter, they come for the skiing and boarding in the Canadian Rockies at Lake Louise or Sunshine or Norquay.

The Thurston Hotel is made of sandstone brick and it’s six stories tall with an impressive entrance. The expansive steps are flanked by black lampposts each with five white globes. Over top of the gabled portico are the three flags representing Canada, the USA and the Province of Alberta.

The hotel was built by Thomas Thurston

and opened in 1916 when he was only twenty-one years old. He didn’t get married until much later. On January 20th 1938, he married Margaret Thurston when he was forty-three years old and she was twenty-eight.

The hotel’s Thomas Lounge pays tribute to the founder, and the Margaret Library is named after his wife.

The couple had four children: three sons and a daughter. Only the daughter, Emily, is still living.

Two of Emily’s brothers were childless, but her brother George had three children: Wendy (40), Bailey (35) and Benjamin (30). Ben studied hotel management at the University of Calgary and studied even harder under his Aunt Emily’s tutelage to finally become the Assistant General Manager.

His older sister Bailey is Chief Financial Officer, and his oldest sister Wendy holds the position of Events Manager.

As I said, Emily Thurston Jamieson managed the hotel until last August—when she had a heart attack. She recovered nicely, and decided to turn over management of the hotel to her nephew, Ben.

Rumor has it that his older sisters didn’t particularly like that decision, but then they have always given their little brother a hard time.

And speaking of rumors, there’s also a rumor that the hotel has a ghost. Of course, it’s a silly notion, since we all know ghosts don’t exist.

The Thurston Hotel Books are standalone contemporary romances connected by common settings, characters and events. To see all the covers, meet the authors, read the blurbs, and see a map of Harmony, go to: www.ThurstonHotelBooks.com.