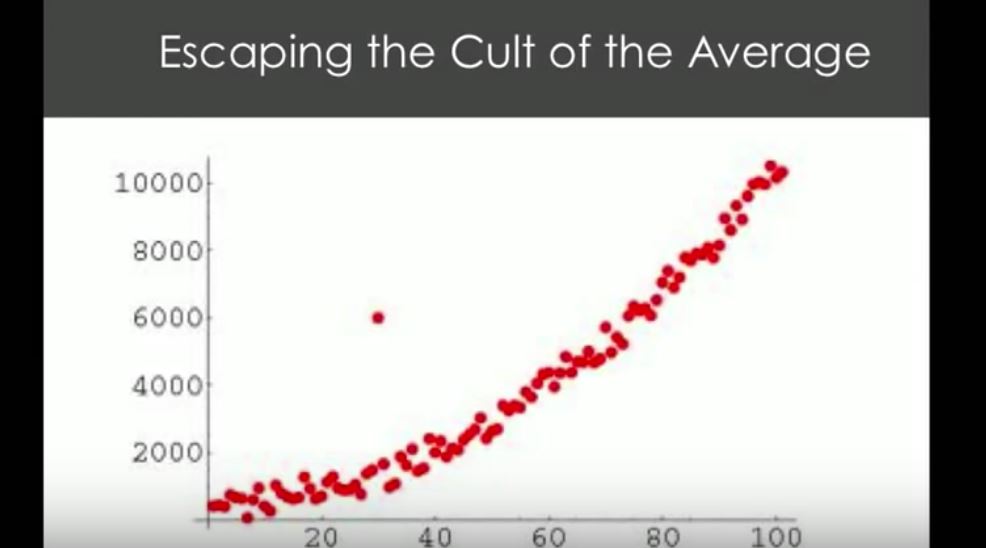 I came across an excellent TEDx video, only 12 minutes long, about THE SECRET TO BETTER WORK.

Not only is Psychologist Shawn Achor hilarious in this presentation, he presents some truly useful research.

It is not reality that shapes us but the lens through which your brain views the world that shapes your reality.

And then he goes on to talk about how we can change that lens.

He says we need to find a way of becoming positive in the PRESENT, and then happiness leads to success. It’s Not the other way around. It’s Not success leads to happiness.

There are ways to train your brain to become more positive and Achor gives us that list.

I hope you listen to this. It’s definitely worth the 12 minutes. 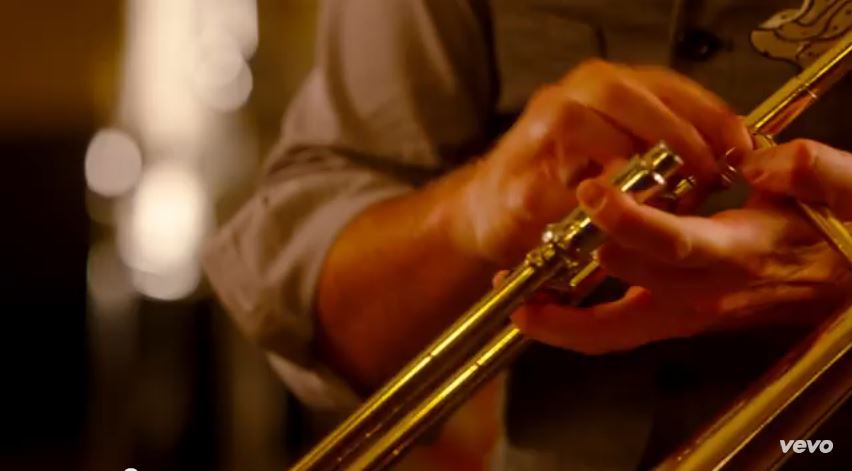 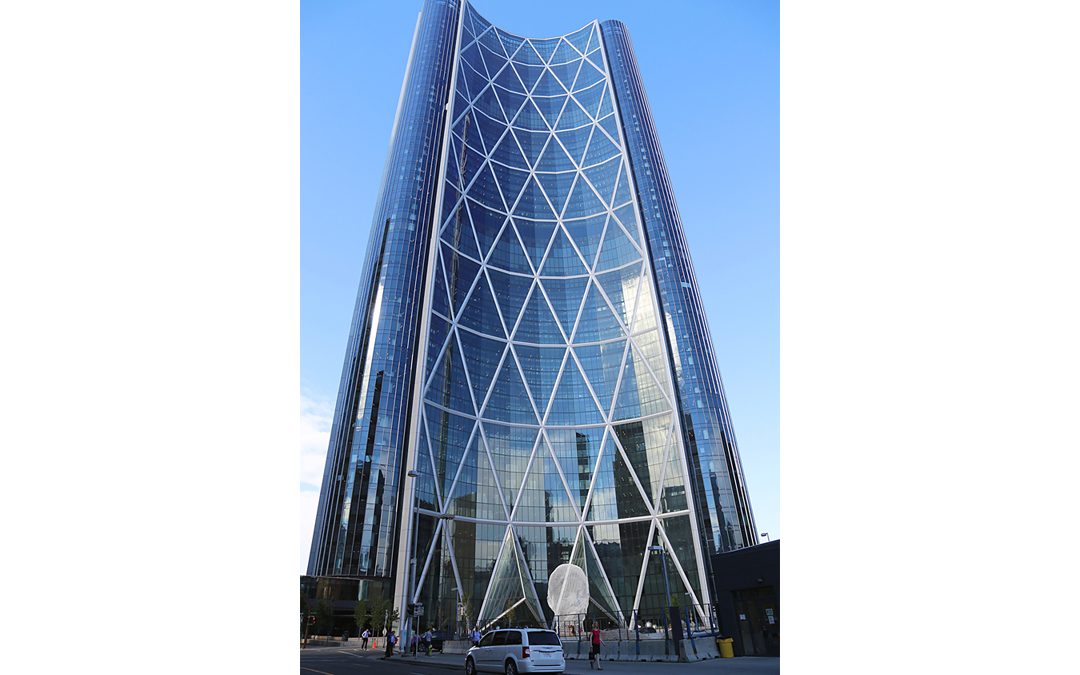 On Wednesday, Rolf and I visited Calgary’s tallest building. “The Bow” is the headquarters for Encana Corporation and Cenovus Energy. Our D-I-L Liz works for Cenovus so she got us Visitor Passes and showed us around. 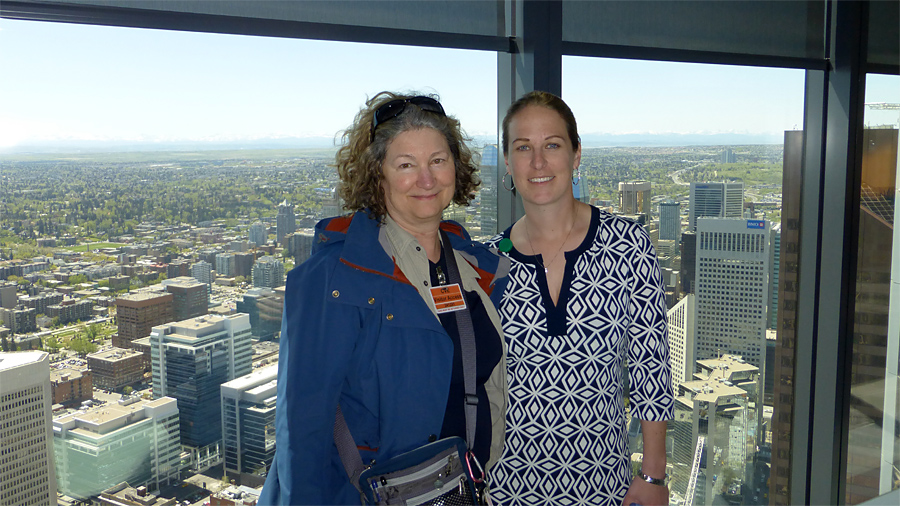 The building is named for the Bow River which runs through Calgary. 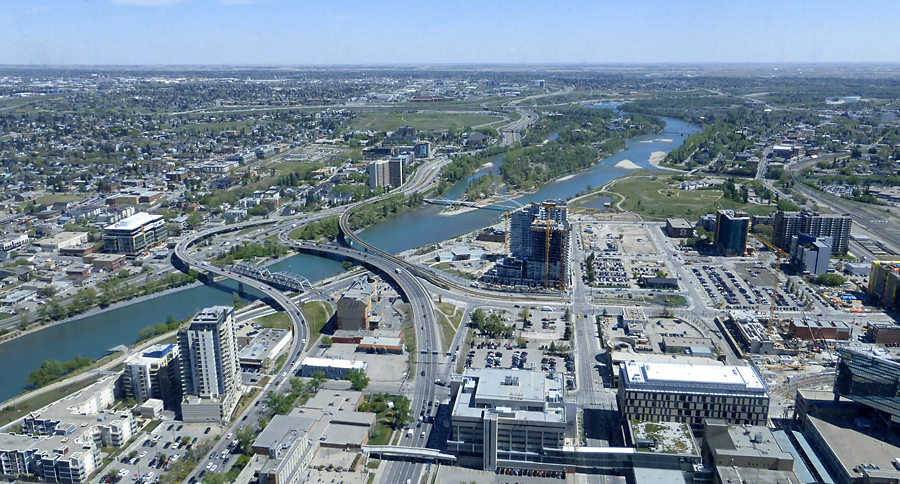 You can watch the scene here:

But the Bow is the tallest building I have ever been inside. Three weeks ago, I was on the observation deck of the Calgary Tower with Debra Dixon. You see “The Bow” behind us here.

The first 24 floors are for Cenovus and above that are the offices for Encana. There are also three indoor gardens – each six storeys high. Cenovus has one at the 24th level, Encana has one at the 42nd level and there is a shared garden at level 54. 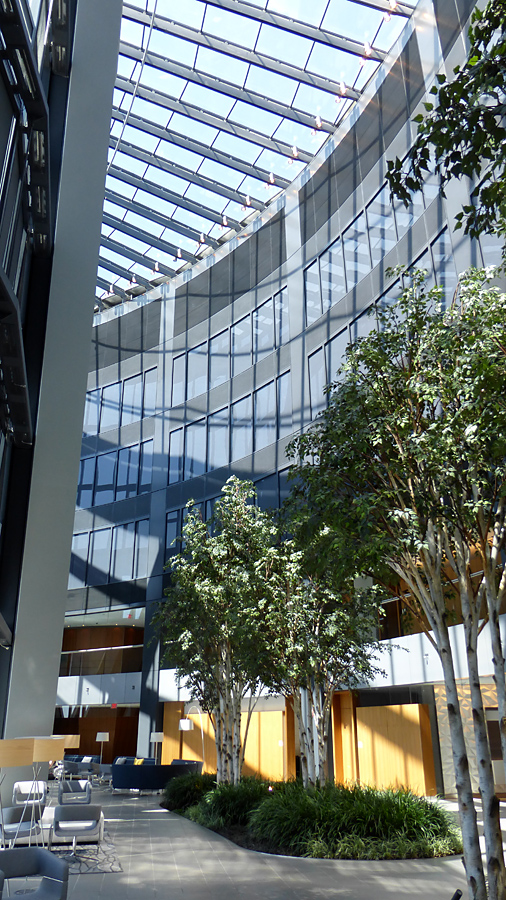 indoor gardens at The Bow

The building was completed in 2012. Its position and shape give it the maximum amount of sunshine. Solar heat is collected in the atrium and redistributed, making the building more energy efficient. 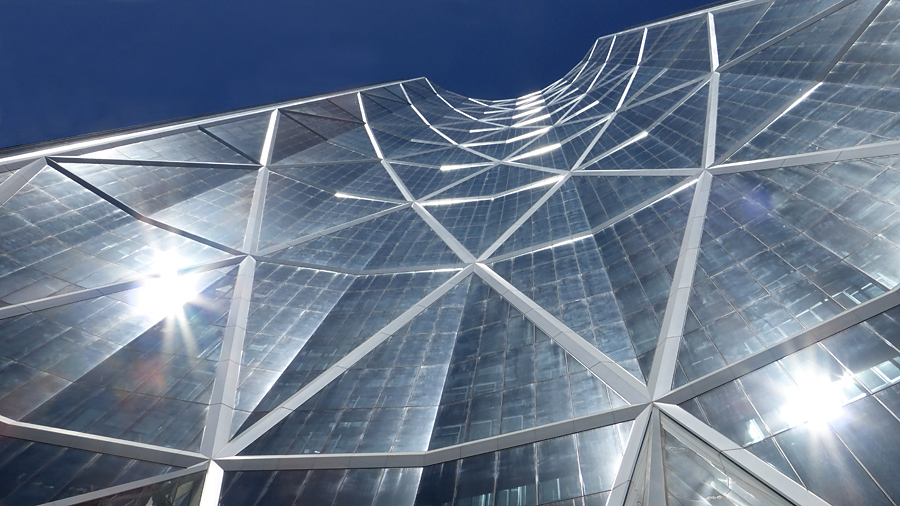 The crescent shape of the building deflects the prevailing winds, which allows for a lighter structure.

And what a view! 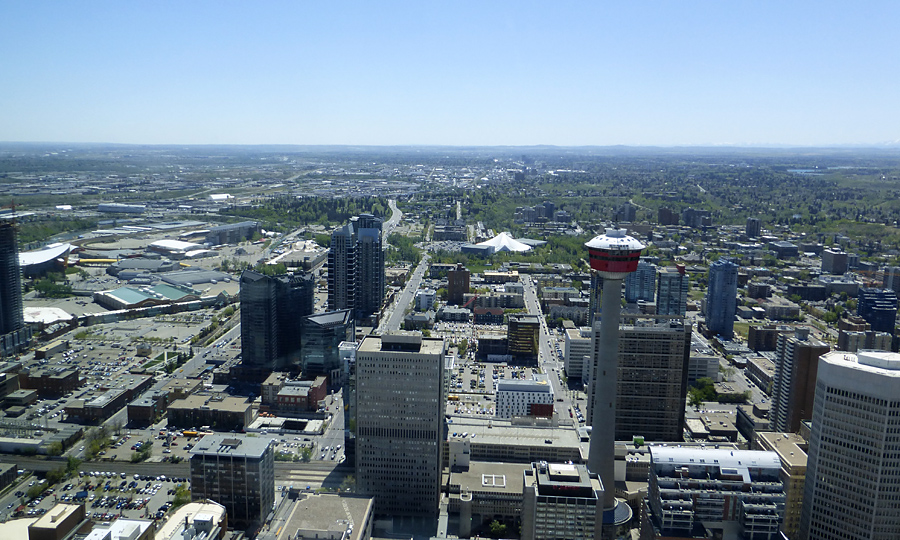 looking south to the Calgary Tower 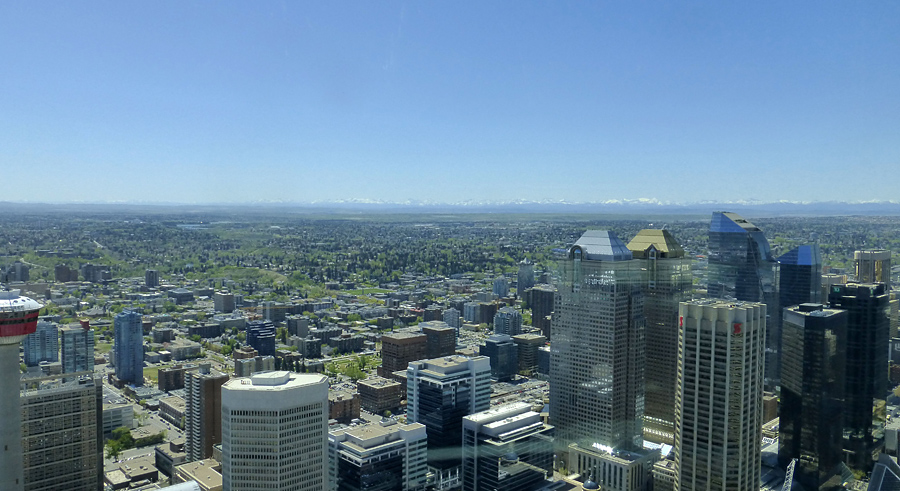 looking west to the Rocky Mountains

In front of the building is a 12 metre (39 foot) sculpture officially called “Wonderland”  but everyone refers to it as The Head. 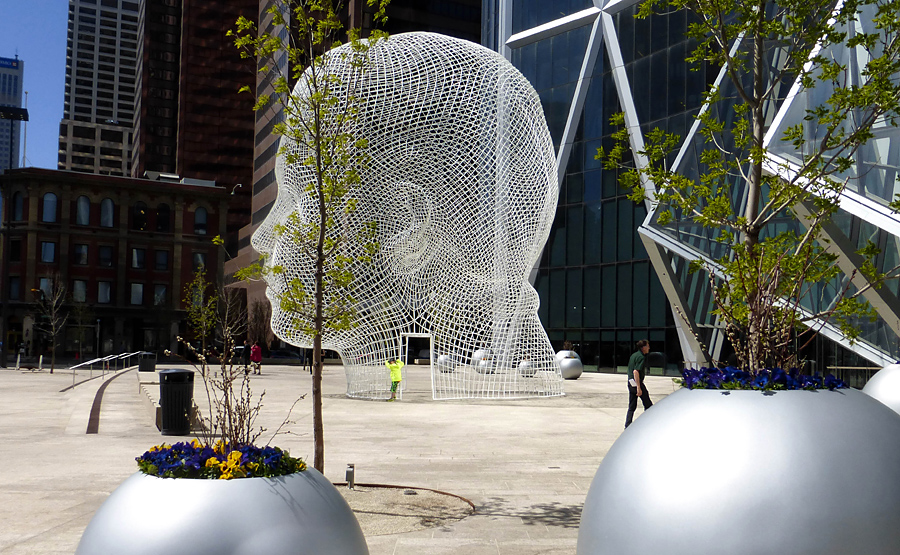 A full-time security guard is on duty to keep people from climbing The Head, but it’s okay to go inside it. 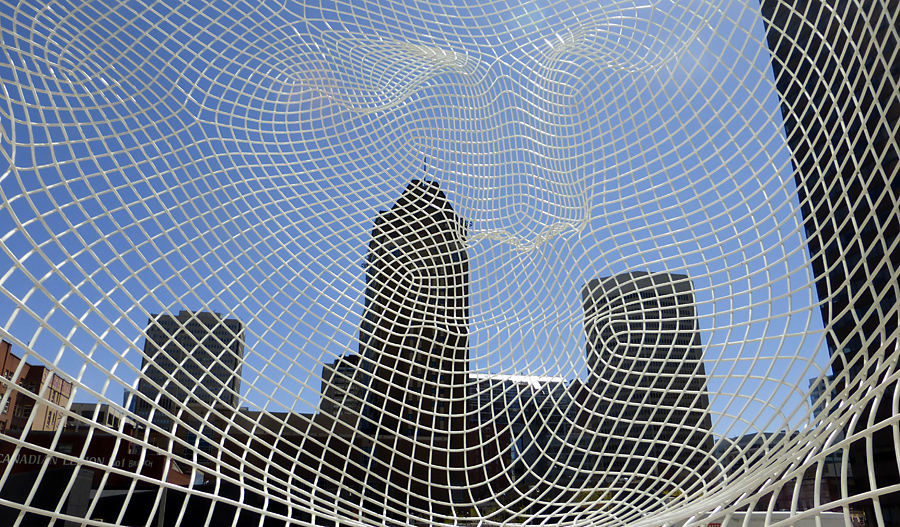 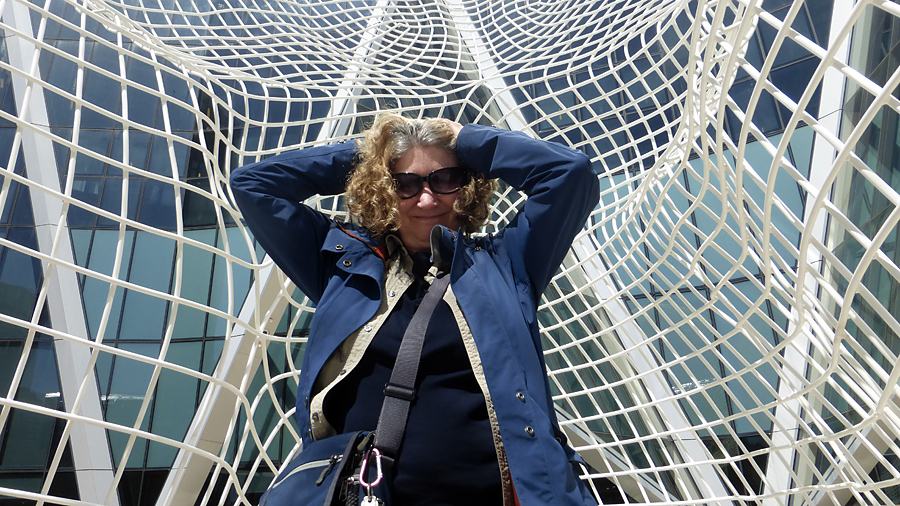 Have you been up high lately? How was your view? 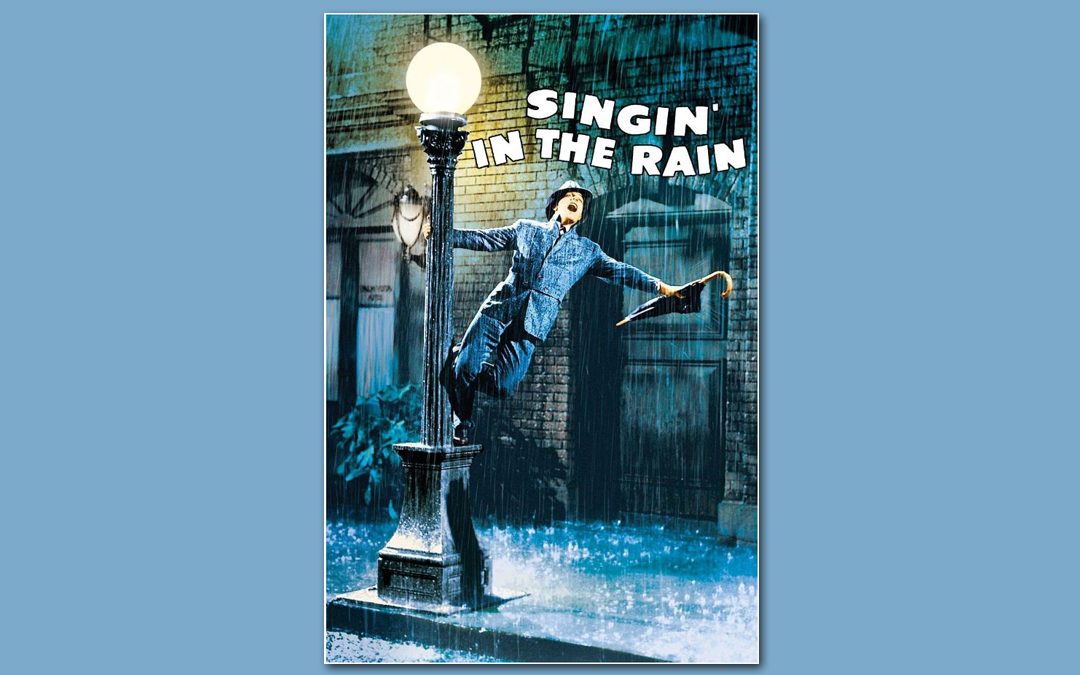 Singin’ in the Rain

Showers and thunderstorms are predicted for today in Calgary. That means it’s a good day for writing. Some people like singin’ in the rain. I like writing in the rain.

Last week, THE GHOST AND CHRISTIE MCFEE was free on Kindle. It was fun watching the downloads all over the world. I even had downloads in Mexico, Brazil and Japan. Now I’m hoping for some more reviews on that book.

In the meantime, I am hard at work on my WIP (work in progress) – the one that has turned out to be the second in a series, with the first in the series still consisting of only a few scattered thoughts.

Book One and Book Two will each be complete stories, but since I’ve spent so much time creating the fictional town of Highbury, there needs to be more than one story set there.

I haven’t added a YouTube to my YouTube collection for a while so here’s one to get you in the mood for working on whatever you are working on today.

Do you like to listen to music while you work? 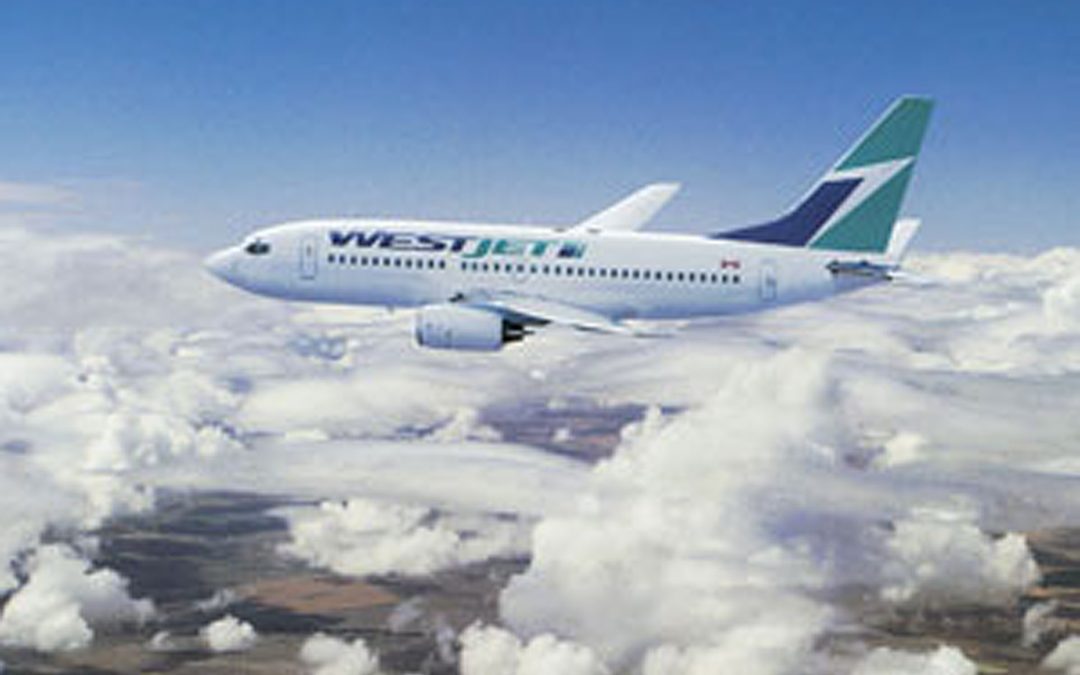 WestJet is a Canadian Airline that was founded in 1996. It started off with service to Vancouver, Kelowna, Calgary, Edmonton and Winnipeg. Later that year, service was added to Victoria, Regina and Saskatoon. Today, WestJet flies to 18 countries and has become Canada’s favourite airline. And my favourite airline too! There’s just something about those WestJet staff.

One time I was flying from Calgary to London, Ontario. Just prior to takeoff, I took out my reading glasses and the lid on the case went “flying”. I mentioned this to the flight attendant as she was making rounds, checking our seat belts and carryon. Next thing I know, she’s holding up the case and asking the nearby passengers to be on the lookout for the missing lid. The guy behind me found it.

Another time, we were nearing the end of the flight to Calgary. The TVs weren’t working so the attendant decided we should have a game—called Toilet Paper Races. On this Boeing, there are 3 seats on either side of the aisle. The idea is you roll the toilet paper from the front of the plane to the back. If it breaks, you tie it together. Then you roll it back up to the front. The first side of the plane to finish wins.

I don’t remember what the prize was, but we all had fun. You only need one person in a row of 3 to participate, but it seemed like everyone was helping to get the roll unrolled and rerolled. Soon we were at the end of the flight and preparing for landing and we’d all had a chance to get to know our neighbour.

There’s a YouTube about WestJet that has recently gone viral. In case you haven’t seen it yet, here it is: