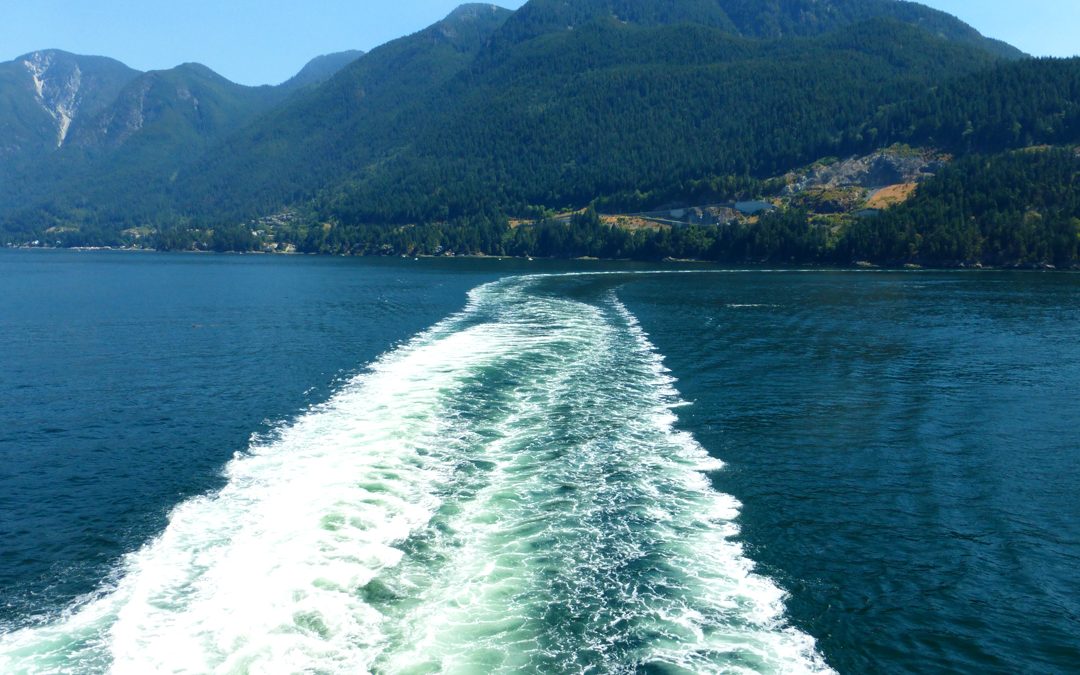 The leaves in Calgary are changing to gold. No frost yet and, so far, none in the forecast.  Of course, it’s still technically summer until the twenty-first. And I’ve heard predictions that we’ll get a very warm autumn.  That would be nice.

This past July, we spent over three weeks in British Columbia.

On July 4, we left Horseshoe Bay on the mainland , taking the BC Ferries ship called “Coastal Renaissance” and landing 90 minutes later at the terminal in Nanaimo on Vancouver Island. 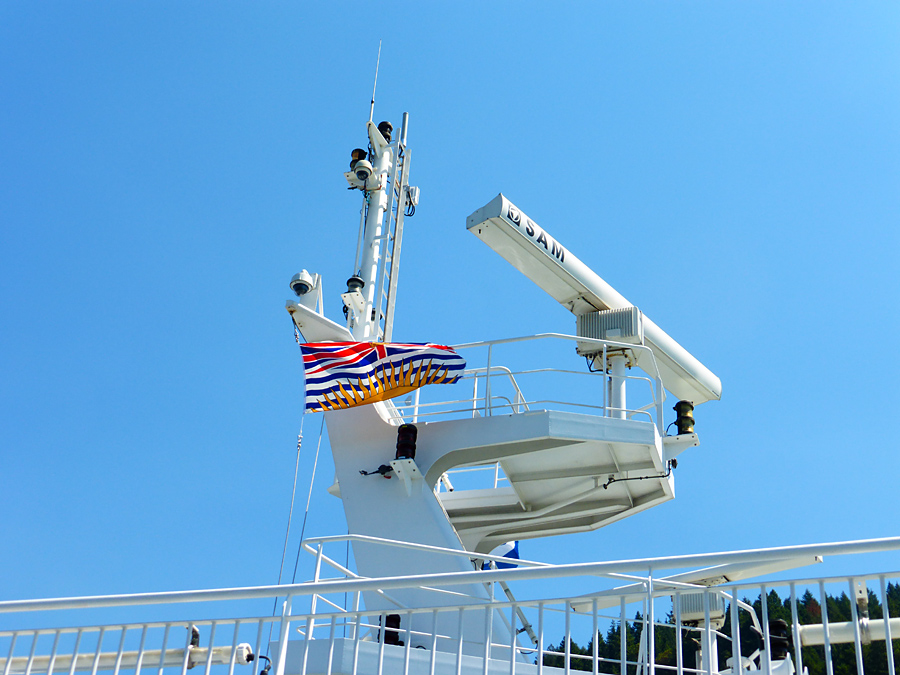 From there we drove north to Courtenay to stock up on groceries. Then we headed back down the island to Buckley Bay where we caught another ferry, a much smaller one, which delivered us to Denman Island where we stayed for a week. During that time we visited Hornby Island twice.

Denman and Hornby are two small islands on the east side of Vancouver Island. 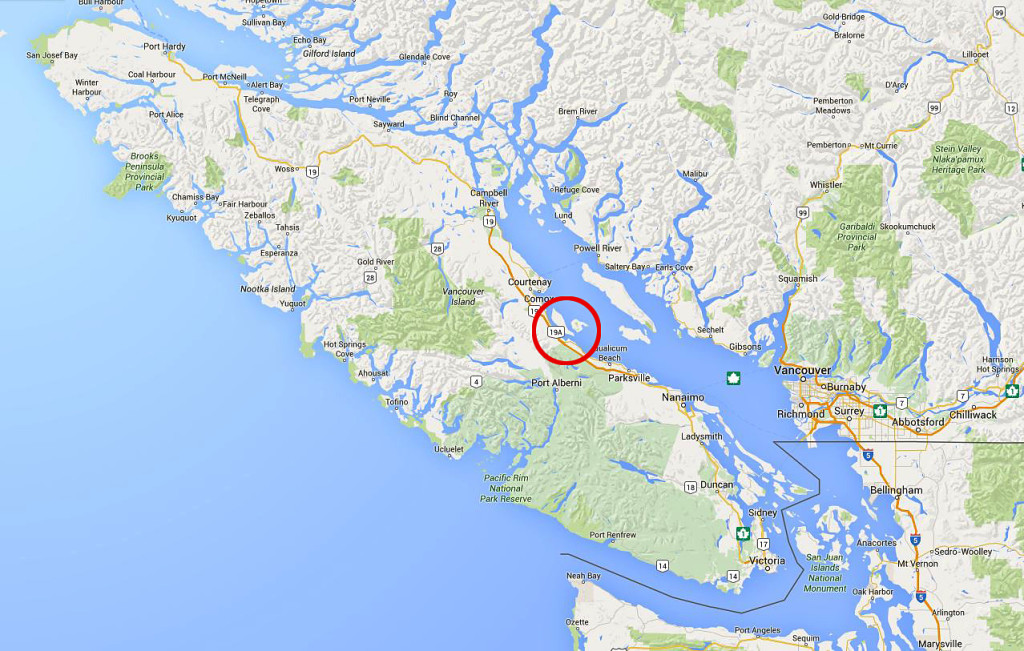 Vancouver Island with Denman and Hornby in the circle 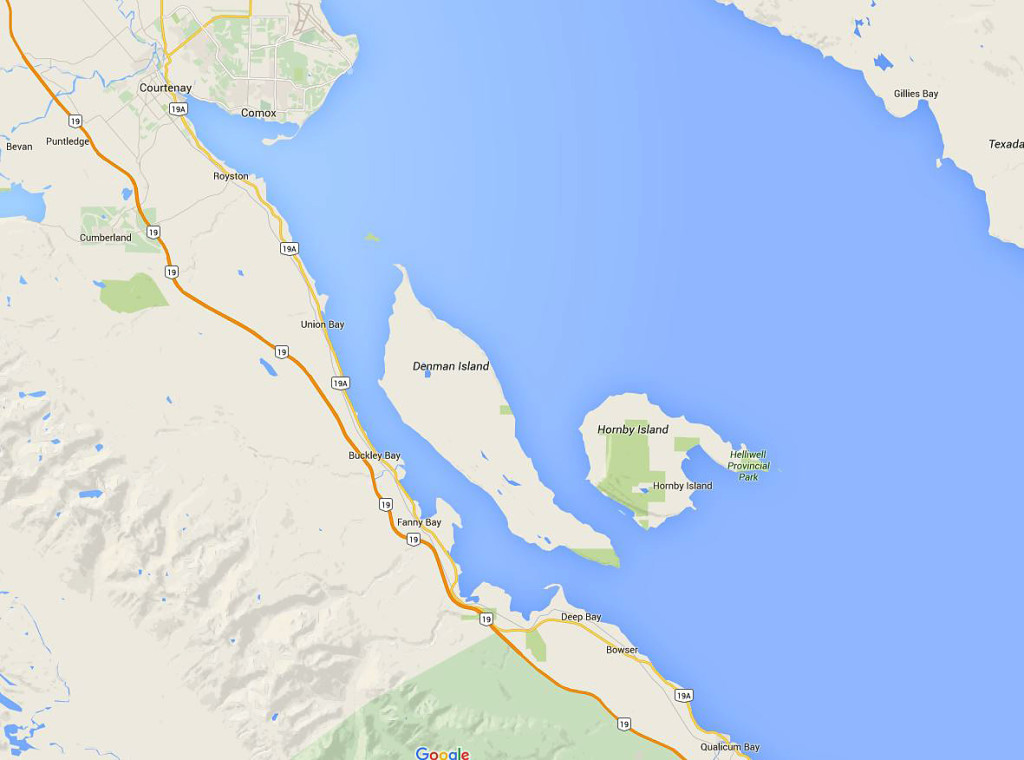 Our son (Ryan) and daughter-in-law (Liz) and their Labradoodle (Makita) joined us on Denman. They were coming from further north on Vancouver Island where they had spent a week at Nootka Sound salmon fishing.

We stayed in a little cottage and, with a five minute walk through the trees, we could be at the ocean shore. 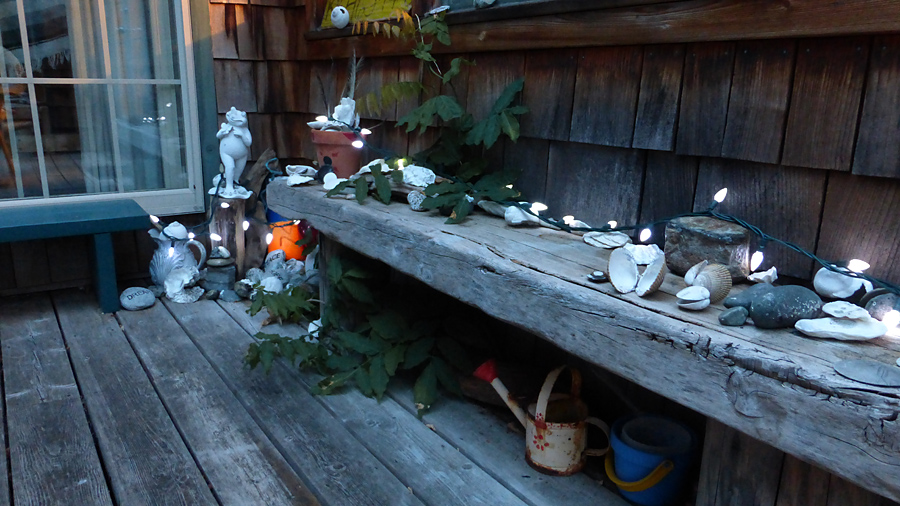 nighttime on the deck of the cottage

Denman Island is about 19 square miles and home to approximately 1000 year round residents. Tiny  Denman Village is made up of a general store, a bookstore, a couple of cafes, a hardware store, some craft stores, a library, a church, a school, a community hall and a post office.

Hornby Island is a bit smaller, about 11 square miles, and also has about 1000 year round residents. During the summer months, the population can swell to 5000.

The people who live full time on these islands are farmers, crafts people, artists, potters, writers, retirees and others looking for a laid-back lifestyle.

~ Walking around the “downtown” on a warm summer’s day ~ 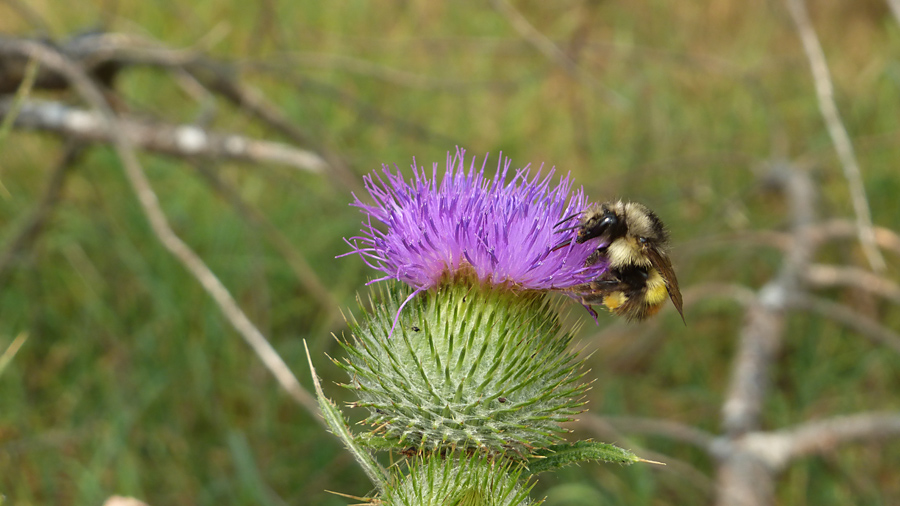 While exploring the island, we visited a vineyard. The farmer was out with her vines so she left this note. 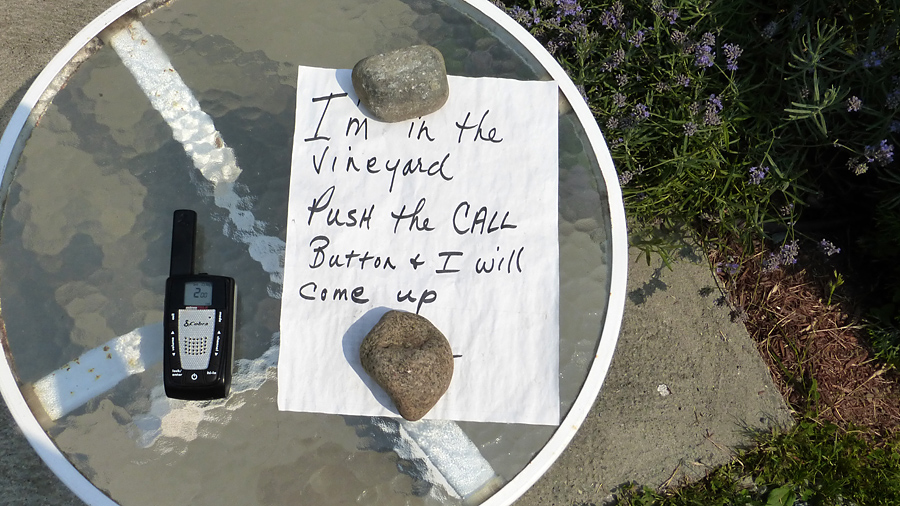 We called her, she returned and invited us inside to taste some wine, and I bought three bottles of the Sandy Island White.

On Wednesdays, there’s a Farmers Market on Hornby Island so we took the ferry across. 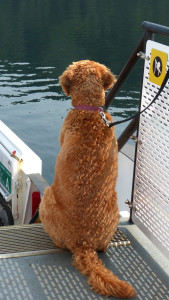 Makita watching the ferry’s progress on the short trip to Hornby Island. 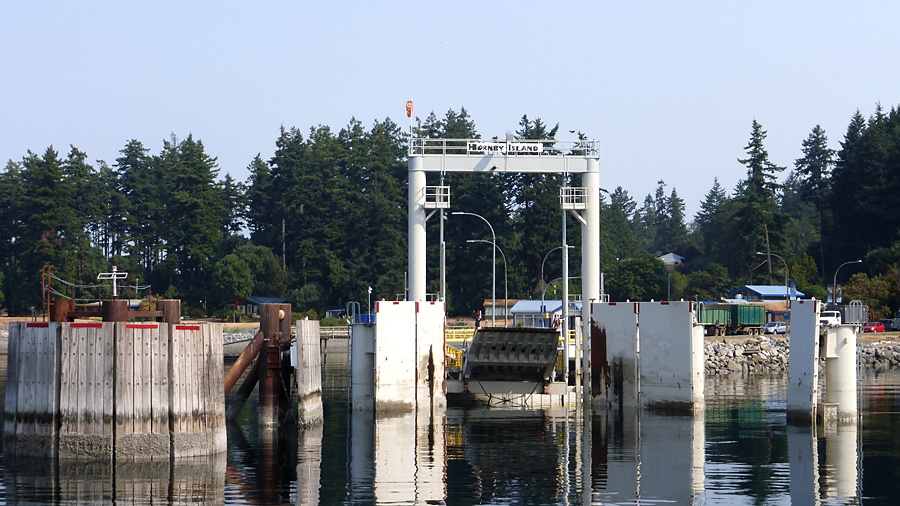 The market is in a treed area with a huge array of stalls selling muffins, jams, vegetables, jewelry, clothing, wine, massage, pottery and more. After the market, we went into “downtown Hornby”  to one of the restaurants. 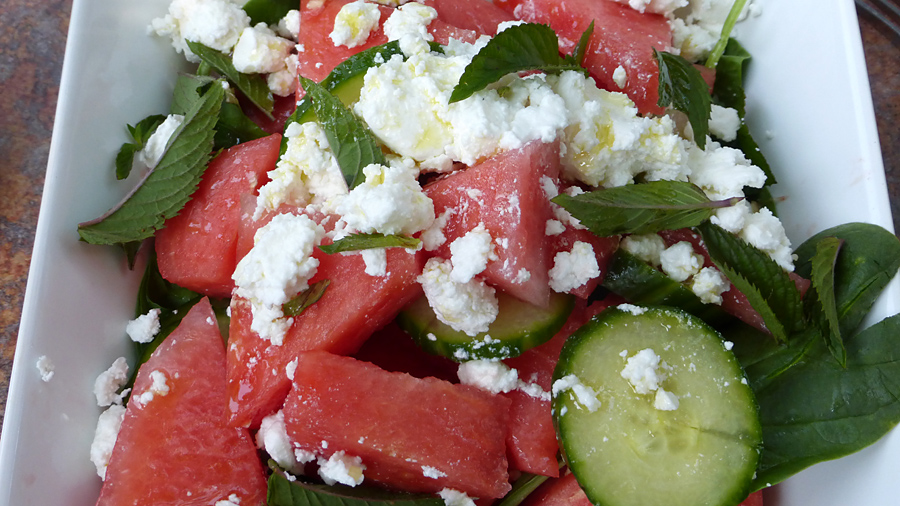 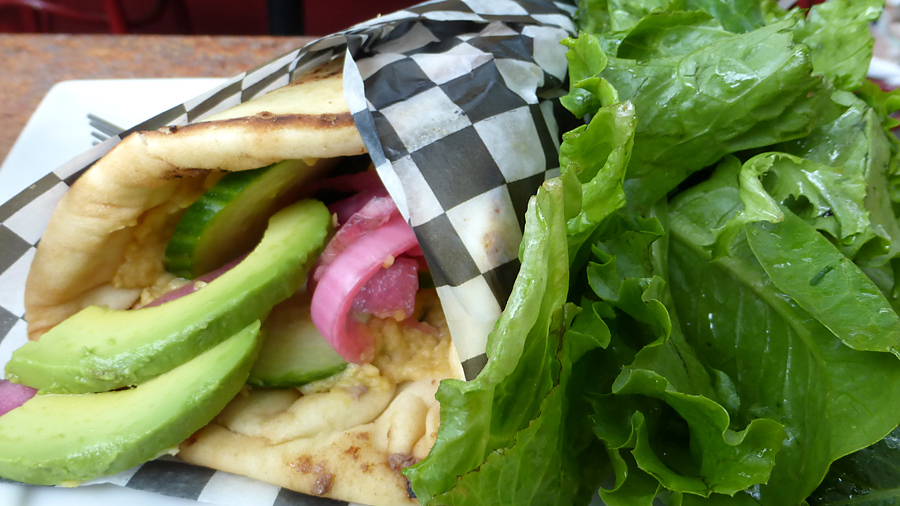 ~ A wrap of avocado, romaine, red onion, cucumber and hummus ~

Later we walked down to Tribune Bay. 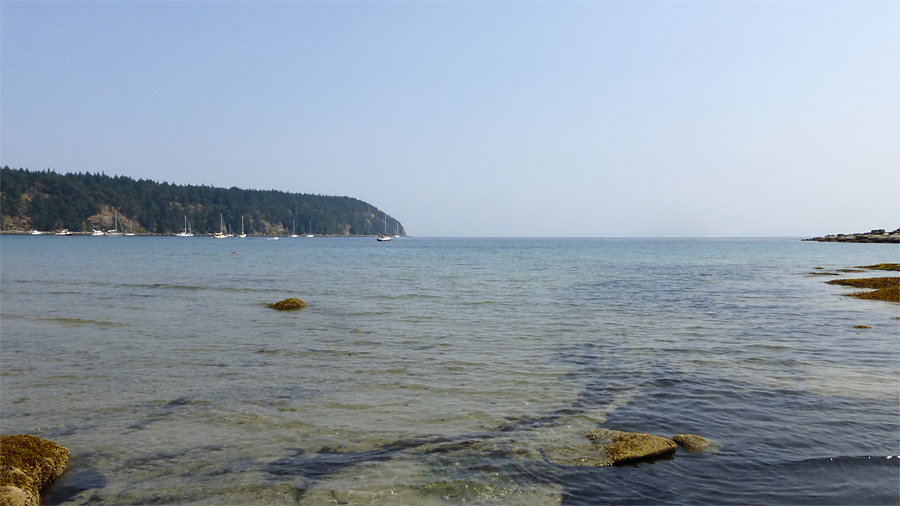 Tribune Bay, on the south side of Hornby, has a white sandy beach and warm, shallow waters.

Still later we ended up at the Cardboard House Bakery for some blueberry sour cream pie. 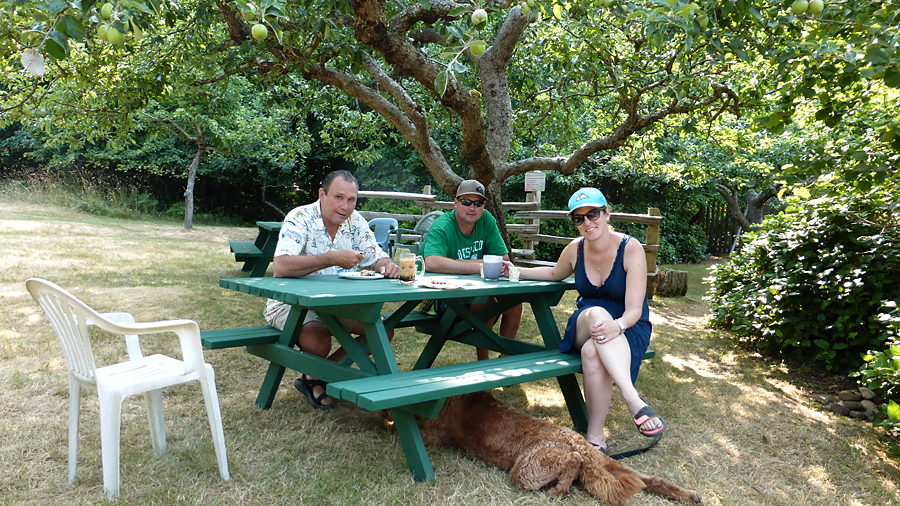 That’s Makita hiding in the shade of the picnic table.

The next day, we went back to Hornby using Ryan and Liz’s boat. 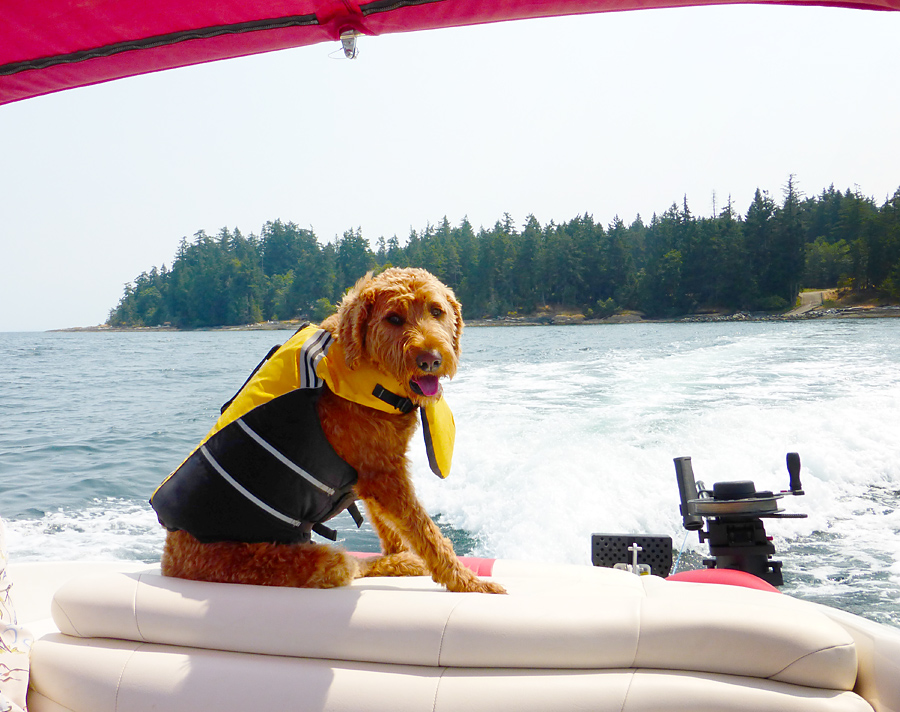 ~ Makita in her life jacket ~

We anchored in Tribune Bay for some swimming. This is me with Makita. We both like swimming but I think she prefers fresh water over the salty seas. 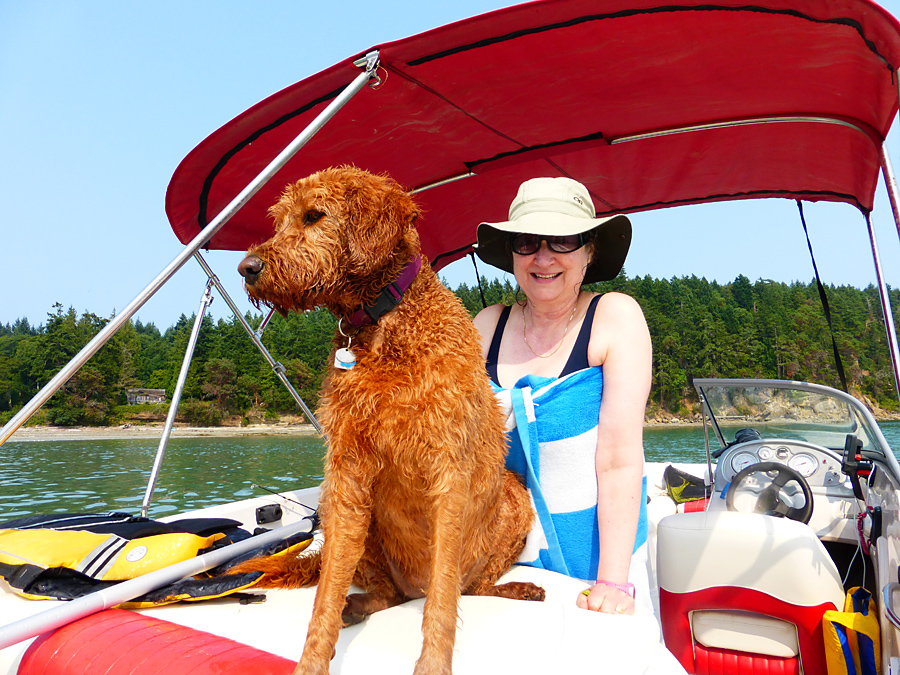 Then we motored over to Ford Cove for fish and chips. 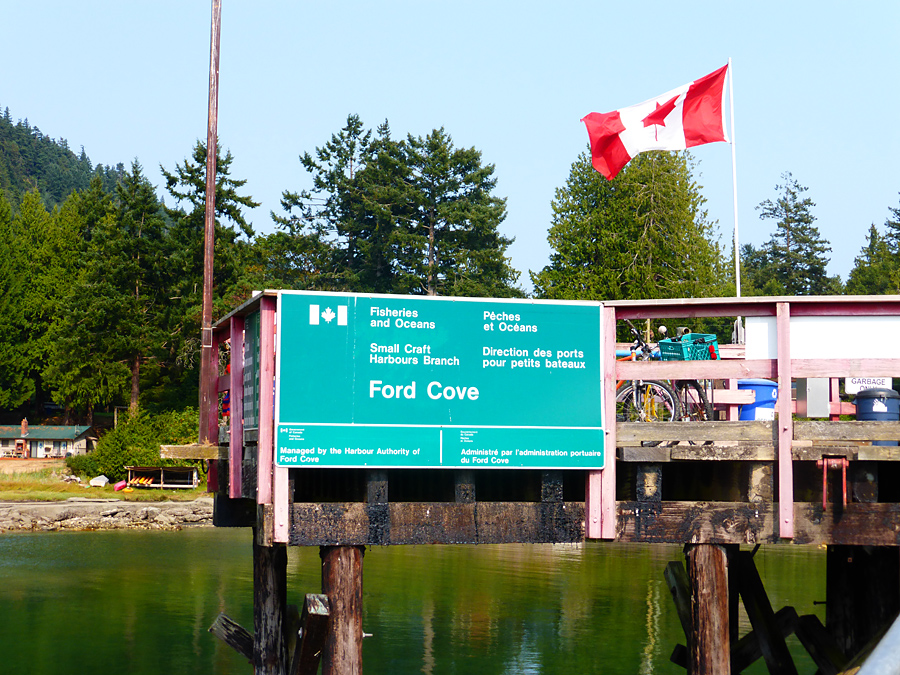 Here I am relaxing on the boat. 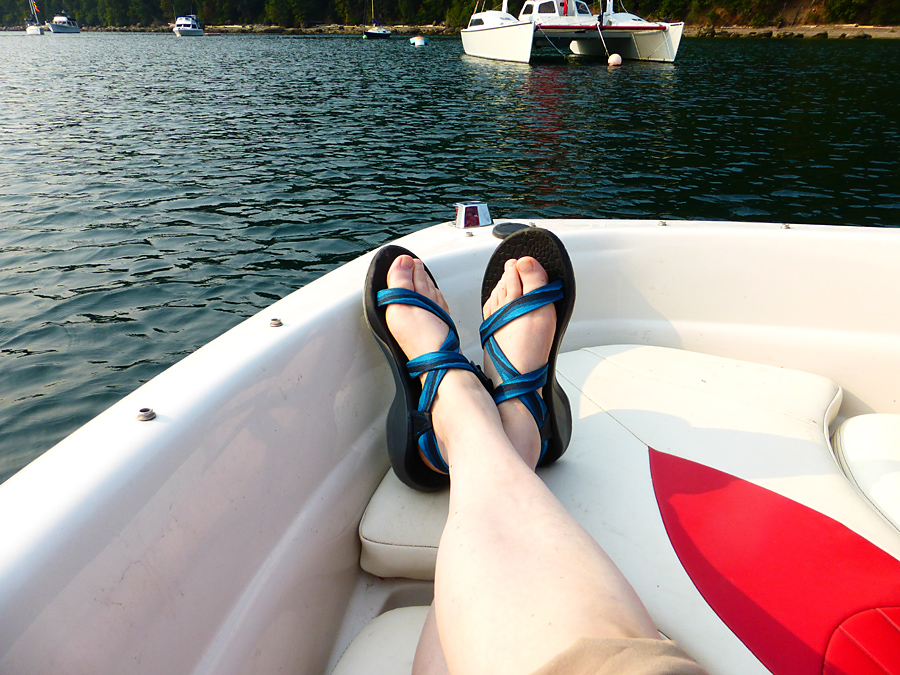 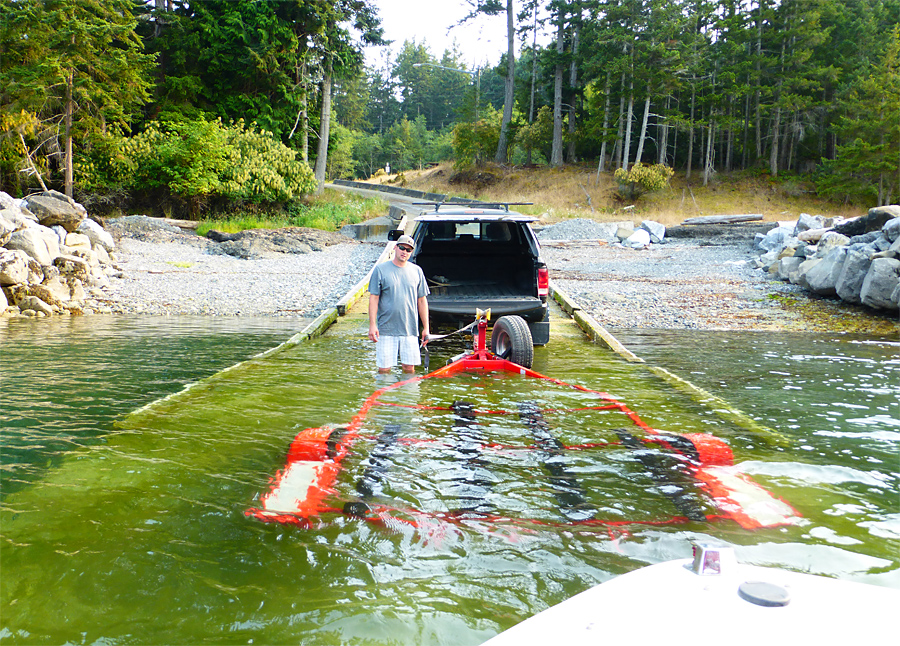 Liz is lining up the boat and Ryan will secure it  to the trailer. 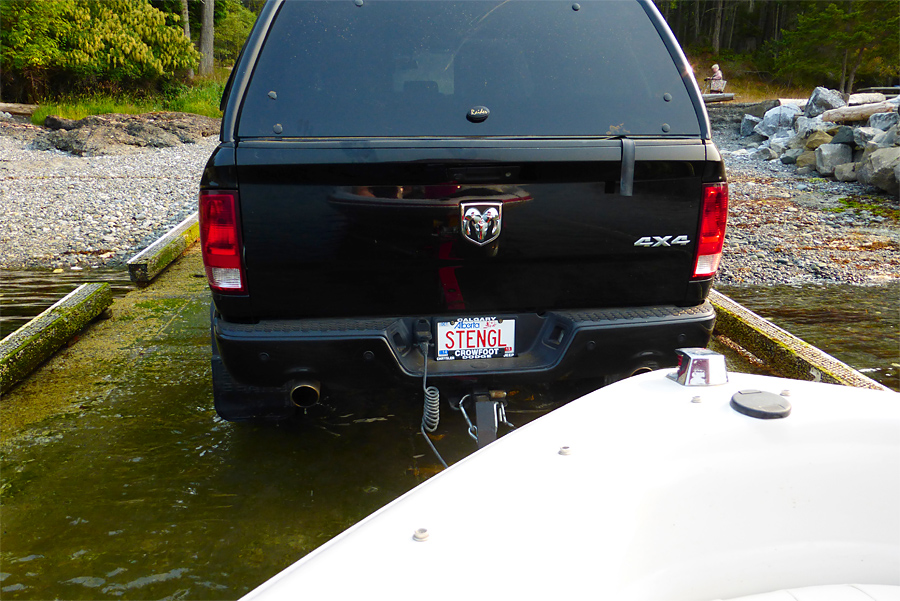 While Ryan and Rolf went fishing, Liz and I relaxed at the cottage. Liz (an artist, as well as an engineer) did some painting. I did some writing. And we both worked on this jigsaw puzzle which reminds me of Tribune Bay. 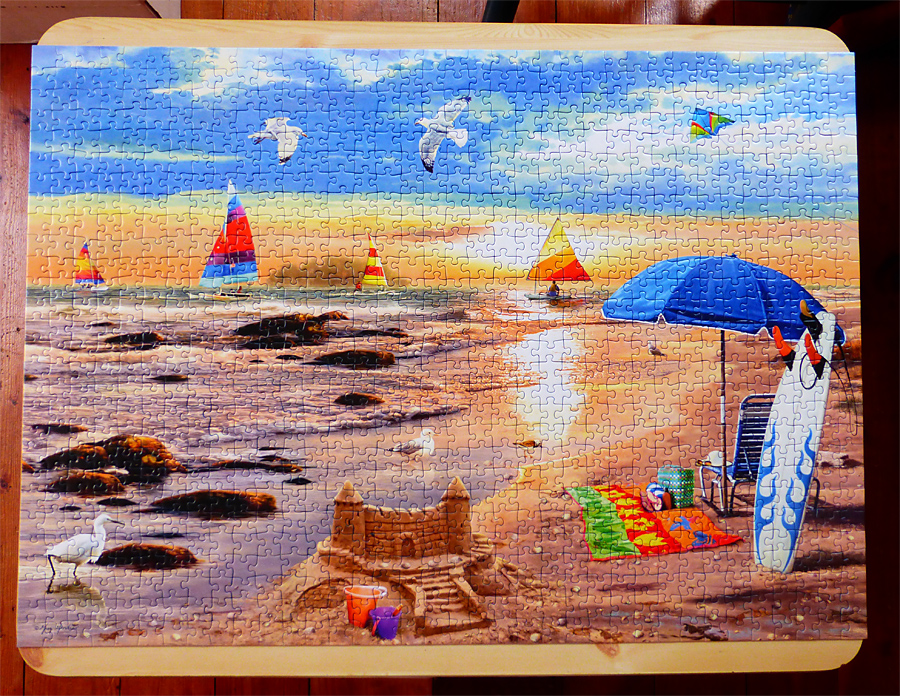 On Saturday, it was time to leave Denman. We said goodbye to Ryan and Liz and Makita. They headed back to Calgary and we were going up island to Campbell River.

It started to rain that morning, a very welcome rain considering the island (and much of the west coast) had been experiencing drought. The Denman Island Farmers Market is on Saturday so we stopped in before we left.

As I wandered around with my umbrella, I bought a hand woven dish towel and another bar of homemade soap. I also had a cup of steaming hot coffee and the best rhubarb coffee cake I’ve ever tasted. 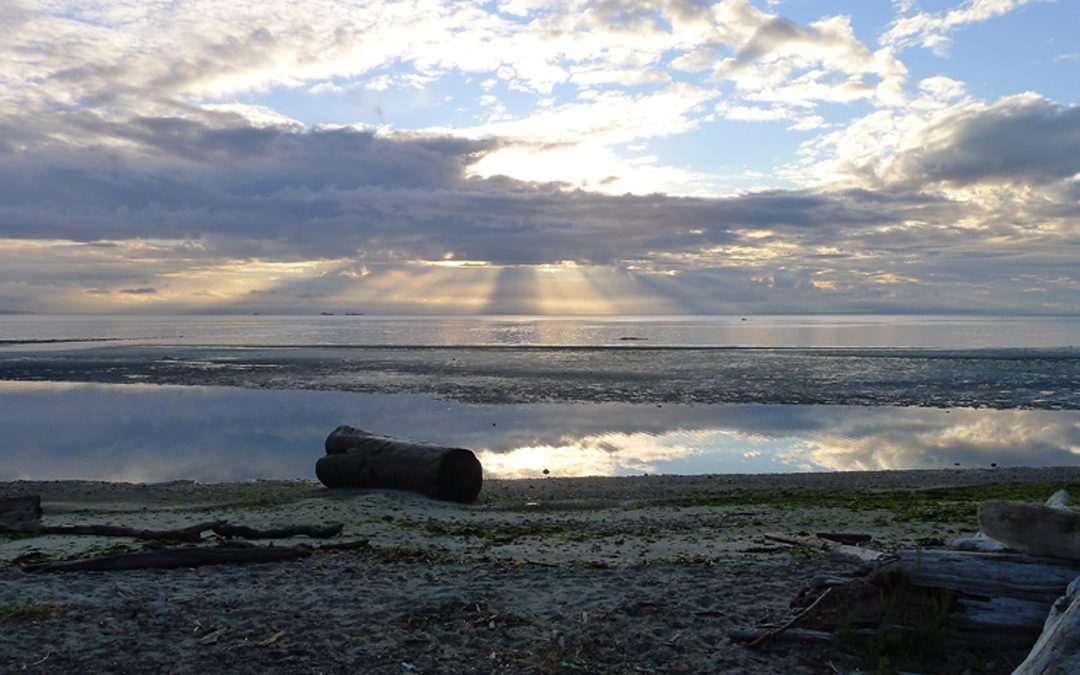 Sometimes you need to stop the world and get off.