In 2011, my local RWA chapter began its first group project, Bandit Creek. I published my first book in that series, THE GHOST AND CHRISTIE MCFEE, and Brenda Sinclair published A BANDIT CREEK MIRACLE.

Last January, Brenda decided to do it again. She came up with a Bible for the Thurston Hotel series and invited local chapter authors to participate. She wanted published authors, but also some unpublished ones who wanted to be mentored.

Brenda came up with the idea of twelve books, one for each month in 2016, to be released WEEKLY, on Thurston Thursday beginning THIS THURSDAY September 29. Brenda bookended the series, writing both the January book and the December book.

The books are standalone contemporary romances that are

connected by common settings, characters and events. There is a thread woven through all the stories about a bride who books the 100-year-old Thurston Hotel in January—for her December wedding. No one is quite sure if the wedding will actually happen . . .

Brenda Sinclair is also the author of the very successful Western Contemporary Romance series, SPIRIT CREEK so she knows a lot about doing a series. We have all thoroughly enjoyed working on the project: at our keyboards, in our “secret” Facebook group, and sitting around long tables in restaurants. Together we discussed ideas, debated covers, ironed out  details and generally had a good time.

Brenda put us on a deadline for first drafts and found continuity editors who would read all the books. She also set us up with one line editor (so we all spelled Trans-Canada the same way) and one cover artist who took our rough ideas and turned them into beautiful art. You can see all the covers here. You may notice that each cover has that hotel logo on the banner—with a different room lit for each book.

I’ll tell you more about the hotel tomorrow . . . 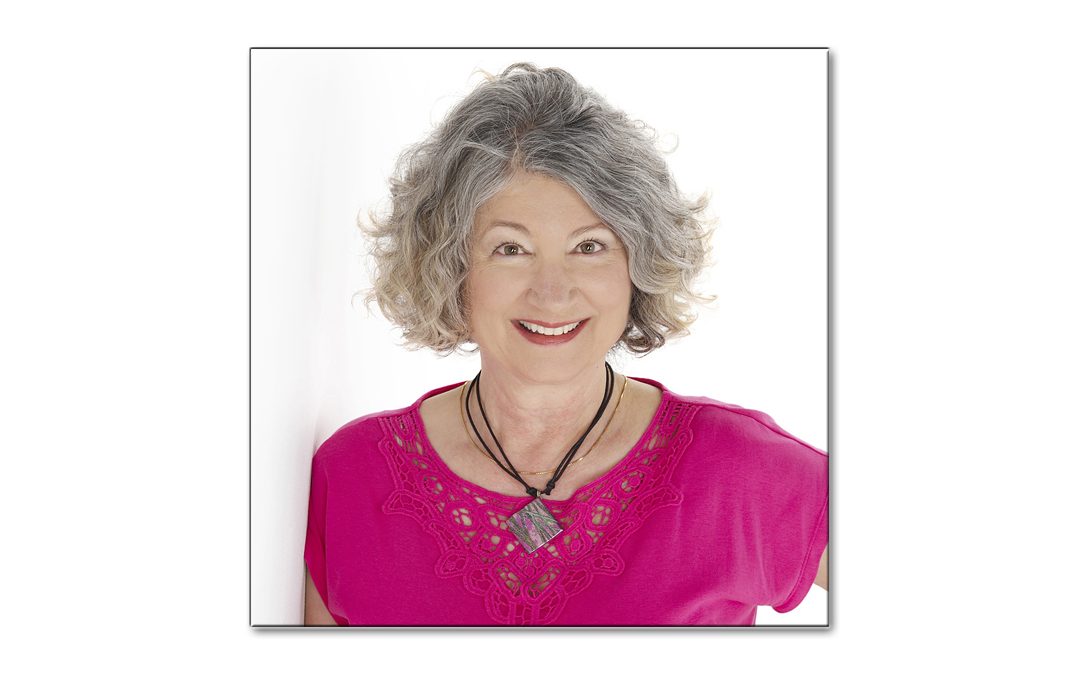 I finally got another profile picture. What do you think?

My last one was from 2011—taken by the University of Calgary people when I was enrolled in Spanish classes there. Now, five years and one grandson later, I am embracing my grey and silver and white and blonde hair. It’s like having natural highlights. Mother Nature has given me changing colour.

Besides the new ‘me’ you will notice a new layout for my website. I used to blog more often, and maybe I will again, but for the time being I am heavily involved with the Thurston Authors. I will tell you more about the project next week. Right now, I can let you know we are launching our first book on September 29th.  My book is the ninth in the series and it will be released on November 24th. Here’s the cover: 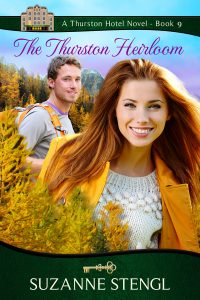 My book is set in the month of September. That background image on the cover is of Larch Valley in Banff National Park, Canada. In autumn, the Larch turn golden and lose their needles. 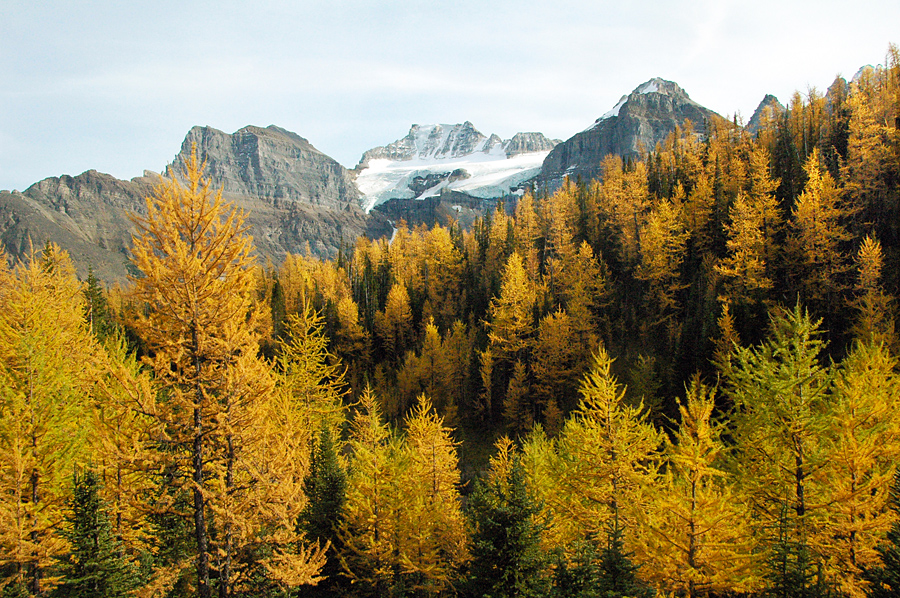 Yes, these trees that look like evergreens lose their needles.

There are several ways of classifying trees. One is by hardwood or softwood. Another is by the leaves and seed production—in other words, the tree is deciduous or coniferous. Deciduous comes from the Latin ‘to fall’ and means the trees lose their leaves in the autumn and are bare during the winter. Usually we think of maples and oaks when we think of deciduous trees. Deciduous trees change colour in the autumn, turning red or yellow or orange.

An evergreen keeps its leaves (needles) year round, and as such, it is the complete opposite of a deciduous tree. Pine, fir and spruce are evergreens. They are also conifers.

But not all conifers are evergreens. Some of them, like the Larch, are deciduous conifers.  Mother Nature has created what looks like an evergreen and has let it change colour.

The Larch typically grow in the cool temperate zones and high in the mountains. Every year, a huge number of hikers head to Larch Valley to see the trees change colour.

Have you ever been to Larch Valley? Do you like watching the leaves change colour. Do you colour your hair? 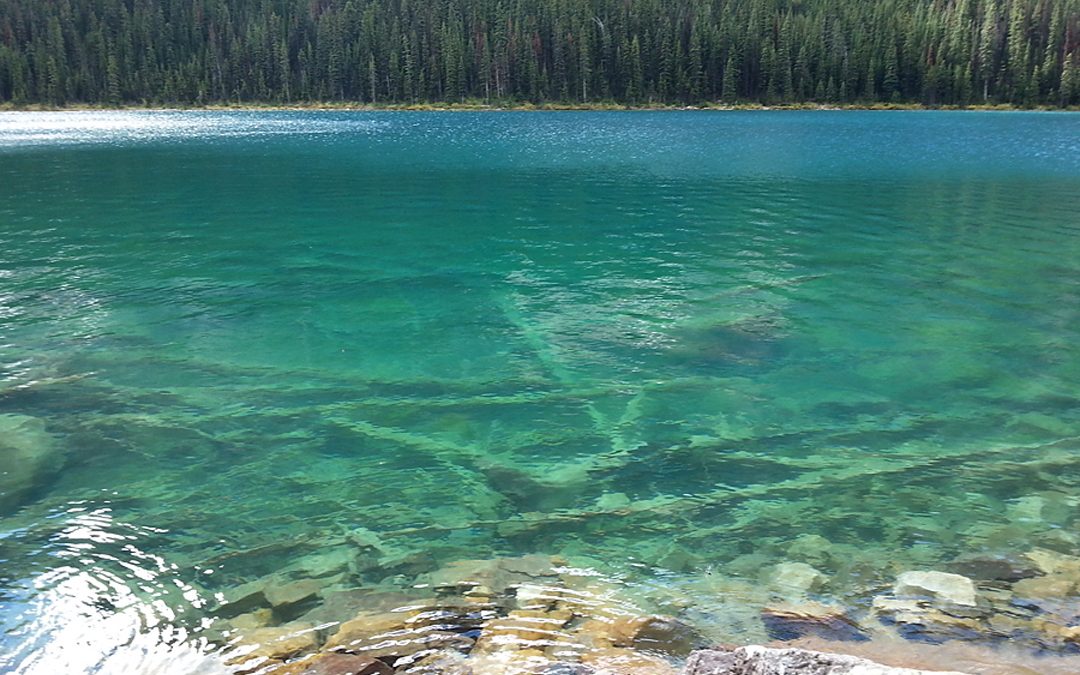 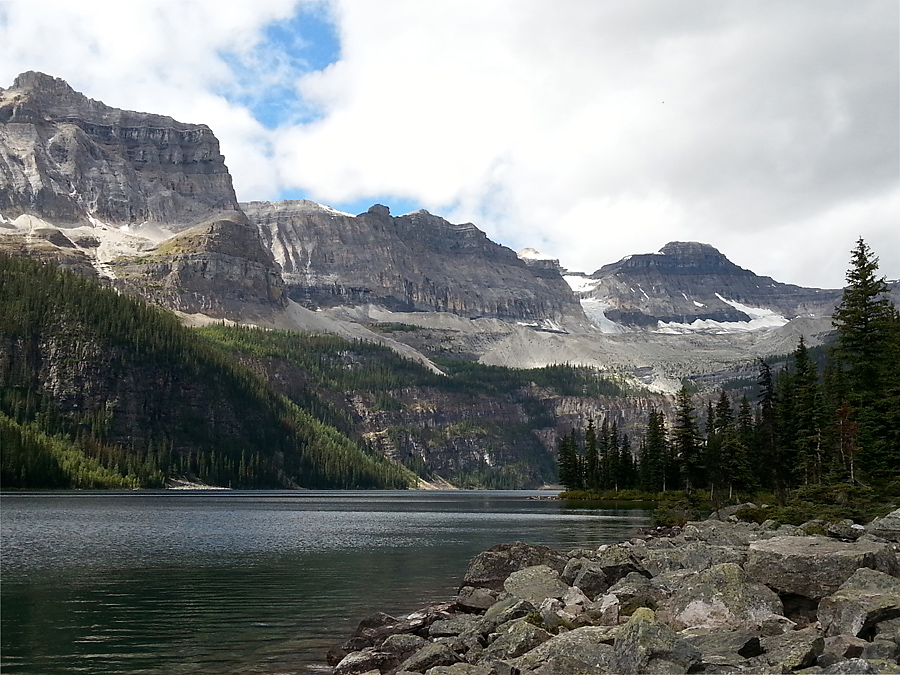 Quadra Mountain and Bident Mountain at the end of the lake

Yesterday Rolf and I hiked the five kilometre (3.2 mile) trail to Boom Lake in Banff National Park. There’s an elevation gain of about 175 metres (575 feet) and it’s nice, gradual climb. 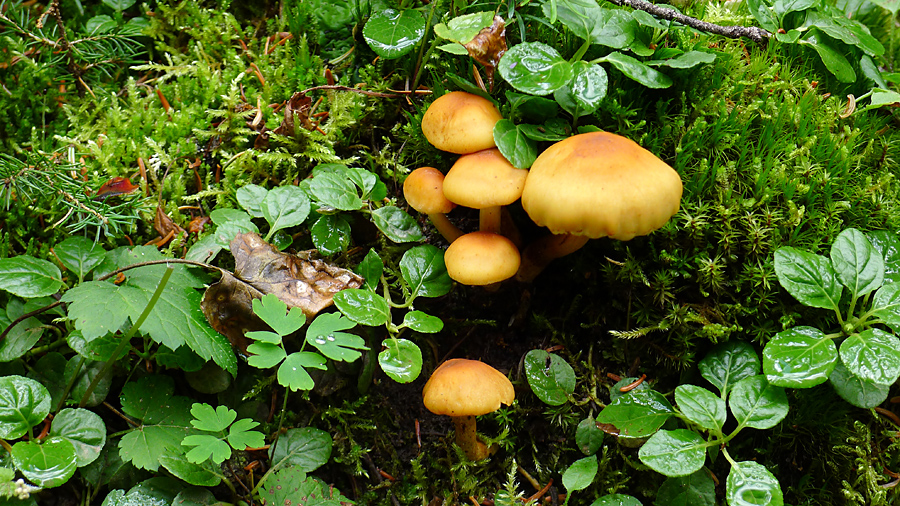 We’ve had a wet summer this year, so the trail was muddy in places, but nothing serious. 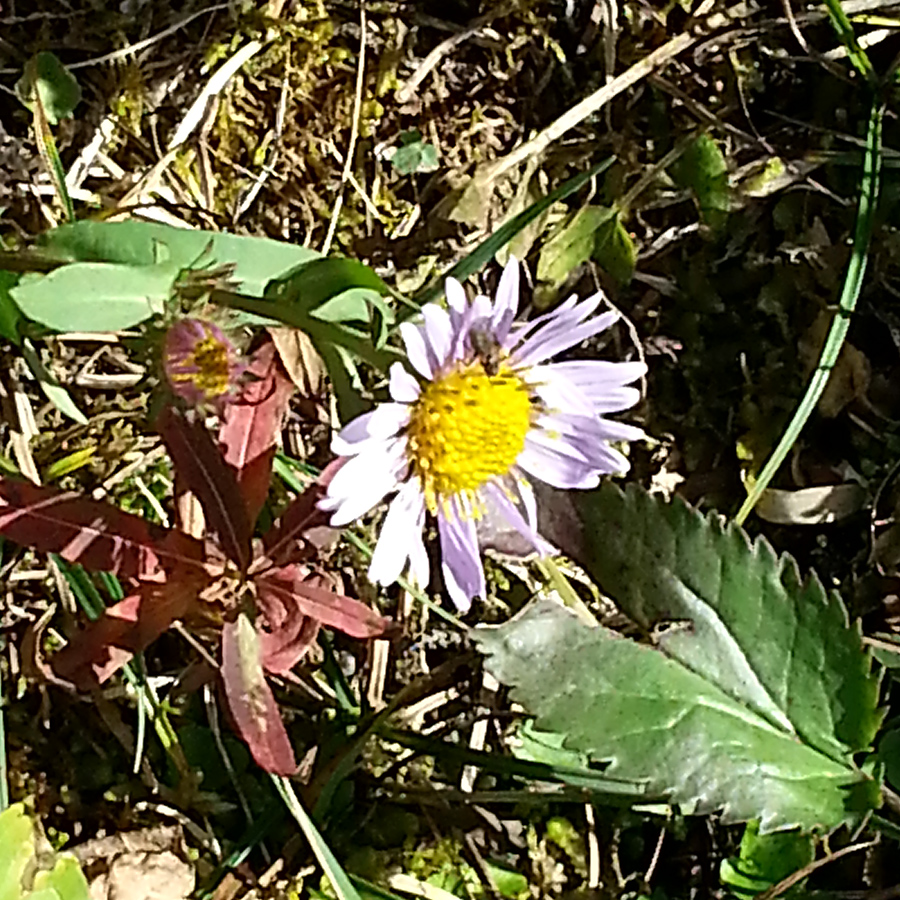 The rain has provided lots of moisture for the vegetation. 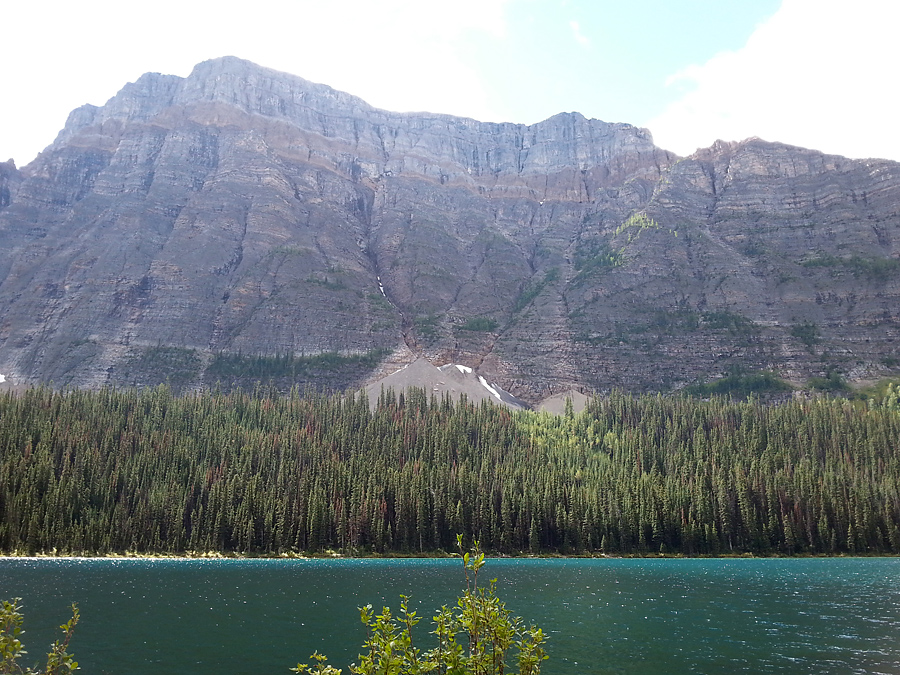 We had lunch sitting beside the lake and looking up at Boom Mountain. 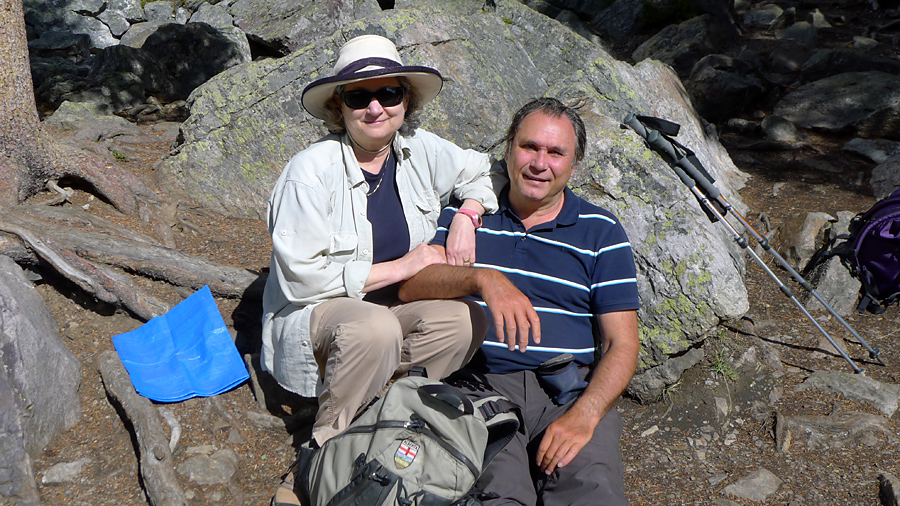 Here are Suzanne and Rolf. They play minor characters in my next book THE THURSTON HEIRLOOM which will be released on November 24th. 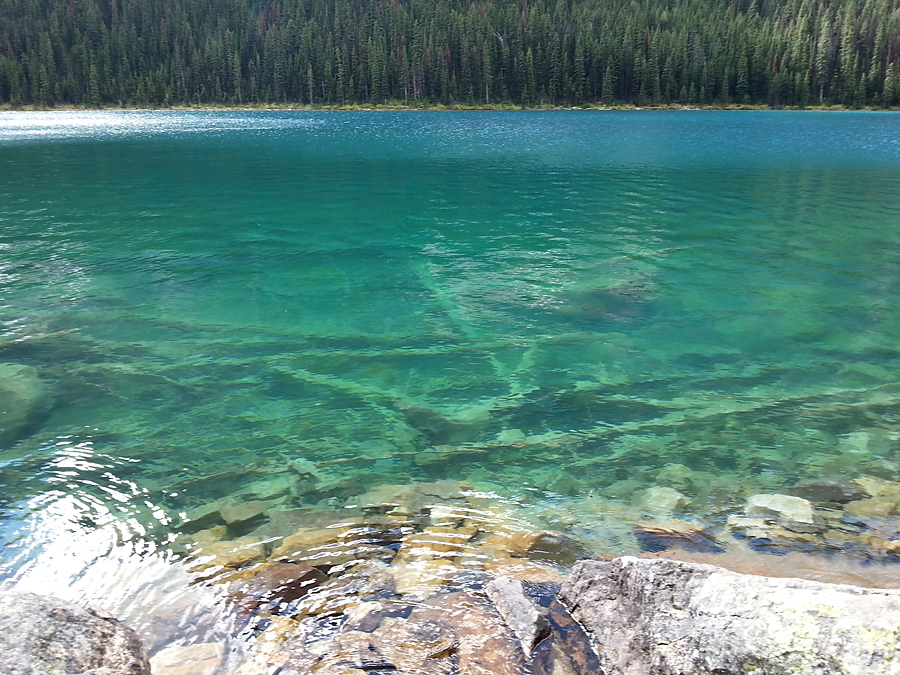 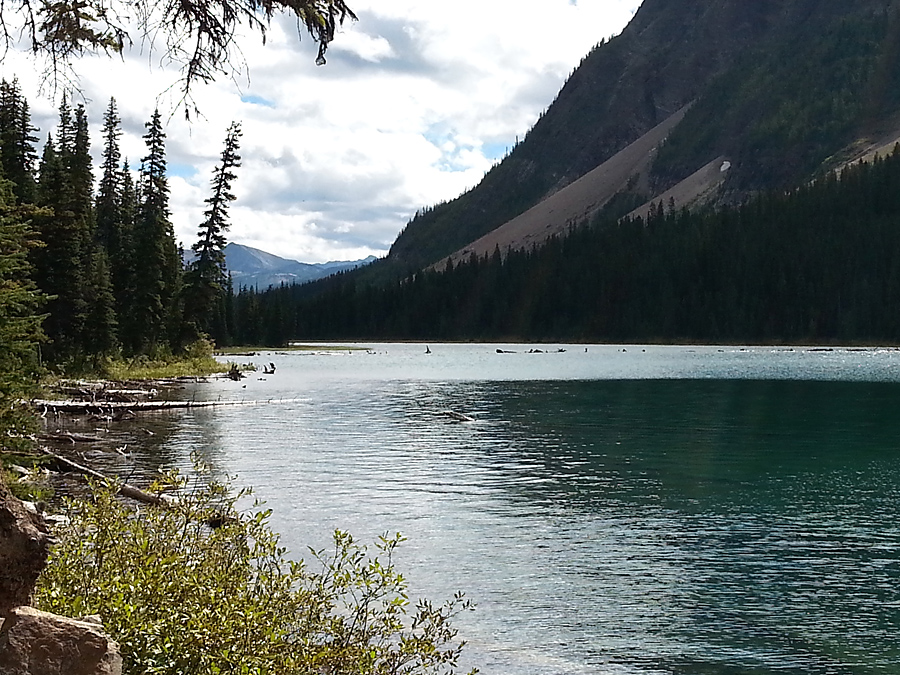 Near its east end, the lake flows over an old moraine that barely touches the surface. The crescent-shaped moraine extends just beneath the water and catches the driftwood floating down the lake, thus creating what looks like a lumber boom. For this reason, the lake is called Boom Lake.

I love hiking, especially in the Rocky Mountains. I love the views and the quiet and the way the air smells. Hiking is one of the best ways I have found to relax, rejuvenate and reorganize my mind. Plus, it’s pretty good exercise. 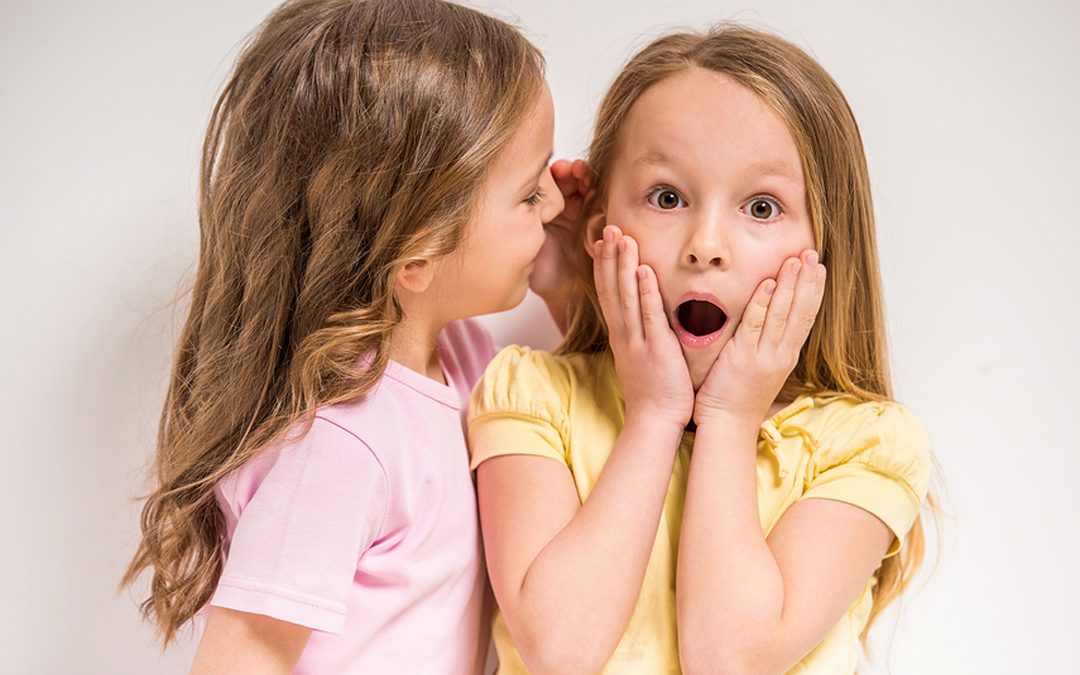 Since January, I have been involved in a multi-author project, along with authors Brenda Sinclair, Sheila Seabrook and eight others.

Sheila has been calling this the “Super Secret Project”  or “SSP” because we are not at liberty to talk about it yet. All I can say is: I am totally enjoying myself!

The books will be released this fall. If you have not already done so, please sign up for my newsletter (Suzanne’s very Occasional Newsletter) and you will be sure to receive updates.