When I first published ON THE WAY TO A WEDDING, I had no idea that someday it would become part of a series. I’m calling this series SOMETHING OLD, SOMETHING NEW.

Some of the books have weddings in them, some only have the promise of a wedding in the future.

Although I wrote it first, ON THE WAY TO A WEDDING is Book 2 in the series. This story takes place in early June, before the summer solstice, so the season is not officially summer, but it’s close enough. At any rate, this is the “summer” book in the series.

The “winter” story happens first. Ryder has just got engaged and Pro is telling him to get a prenup. Ryder is only a minor character in this story that takes place from the first week of December to Christmas Eve.

If you’ve read ON THE WAY TO A WEDDING, you will meet some of those characters again in Book 1.

All of the books are standalone but if you read them in order you’ll see some of the characters grow and change.

The series is about four friends who met in high school. Pro, Ryder, Logan and Mark. They graduated the same year at Aberton, and then they all went on to the University of Calgary. Logan and Ryder in engineering, Pro in law, and Mark in medicine.

Now Ryder owns a construction company. Pro has his law firm in the Sun Valley Tower. One floor down, Logan has a petroleum exploration company. And Mark is in his final year of residency in orthopedics at the Nose Hill Hospital.

The four friends still meet to ski in the winter or hike in the summer. Sometimes they play squash at the university courts. Sometimes they meet to toss a football in the park.

Part of doing a series involves creating a set of covers to tie the books together.

I love my original cover for ON THE WAY TO A WEDDING with that purple lettering. And I like the way the letters slant. I think it suggests a runaway bride.

But the cover needed to change to suit the other titles. Now this cover has green lettering and I love this new font. 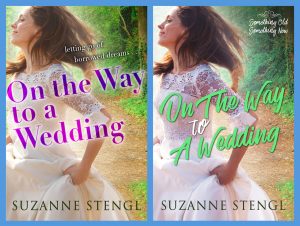 So this is the new cover for Book 2.
Book 1 releases this Wednesday, November 1st.

I hope you’ll come and have a look!