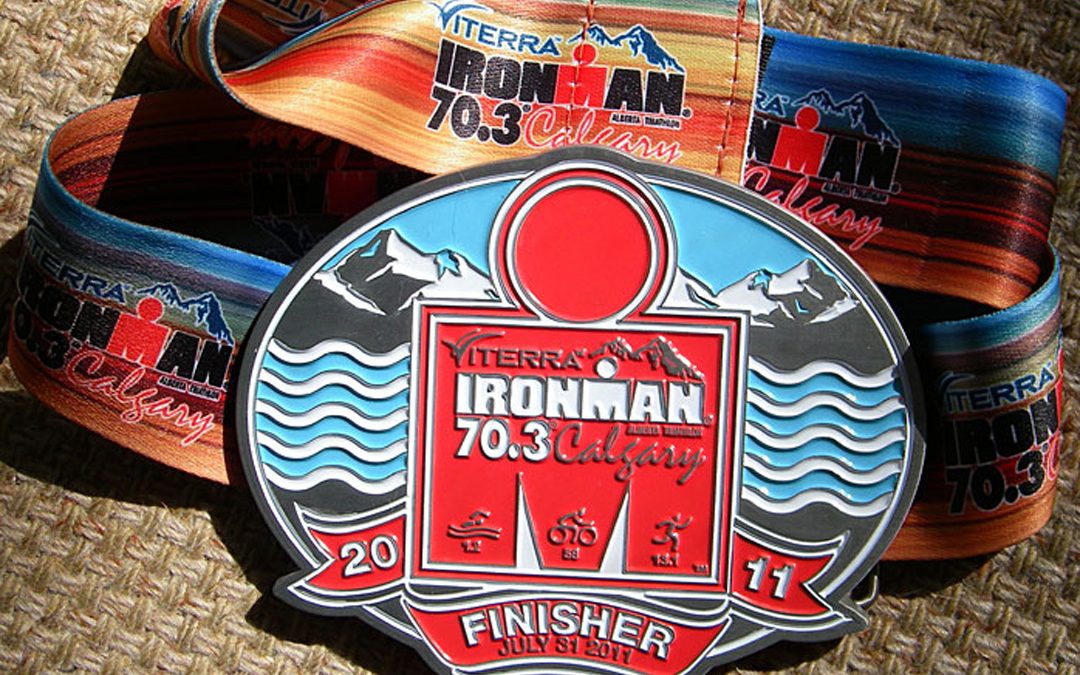 The race begins at Ghost Lake, 45 km west of Calgary.  Athletes are transported from various locations in Calgary by cheesewagon.  (those yellow school buses)

The water in Ghost Lake is 18 degrees Celsius.  Air temperature is only 15  but it’s a bright sunny day.  Of course, participants are wearing wet suits.

Kyle finishes the swim in 43 minutes and he’s pleased with his time.  As he exits the water, he’s unzipping his wet suit and a volunteer helps him to yank off the rest of it.  He’s wearing his triathlon suit underneath.  All he needs to do is put on his biking shoes, his helmet and his race number.  This period of changing out of wet suit and donning bike helmet is called Transition 1.

The biking portion of the race travels north from Ghost Lake, south from Cochrane and then west to North Glenmore Park in southwest Calgary.  Kyle is still full of energy and he’s averaging about 30 km/hr.

By the time he reaches Glenmore Park, spectators are lining the route up to the park and cheering for everybody.  Kyle completes the bike portion in just under 3 hours and he’s satisfied with his biking time.

Now the cyclists must dismount and bring their bikes to the Transition 2 area where once again volunteers help them to find their parking place and the bag that holds their running shoes.  Kyle has another good “transition time” and then he begins to run.  At this point, the effort of the swimming and biking is catching up with him.

The run is out and back through the Weaselhead and around Glenmore Reservoir.

The first 3 km are exhausting.  After that it gets worse.  Kyle runs, jogs and walks and makes it to the first “Aid Station”.  Never having done a triathlon before, he’s pleased about having Aid Stations.  The volunteers hand out Power Aid and water.  As the run progresses, the Aid Stations get more exciting.  The next one has buckets of ice.  He sucks on ice and throws some in his shirt.  By now the lovely bright sunny day is hot and getting hotter.

Later on, Aid Stations have sponges so he can drench water over his clothing.  When he reaches the sign that says only 10 K left, he’s encouraged.

Along the way, many of the participants alternate walking and running and trudging on.  And they wish each other well.

At about 700 metres to go, Kyle takes one last walking break so he can jog into the Finish Line.  And then the Finish Line is in sight – and some guy comes alongside him and challenges him to a sprint.  They are head to head at the end and I think the other guy beat him by about an inch.  Kyle says it was tough on both of them and probably added a good day to their recovery time.  But it was fun!

It’s 27 degrees and his time is 6 hours and 11 minutes.  Respectable for a first effort.   He’s happy with his swim and bike times.  The run will be his biggest improvement next year.

Most importantly, he’s done it.  He’s a triathlete.

So, what do you do for exercise?