The Equator and Fakery 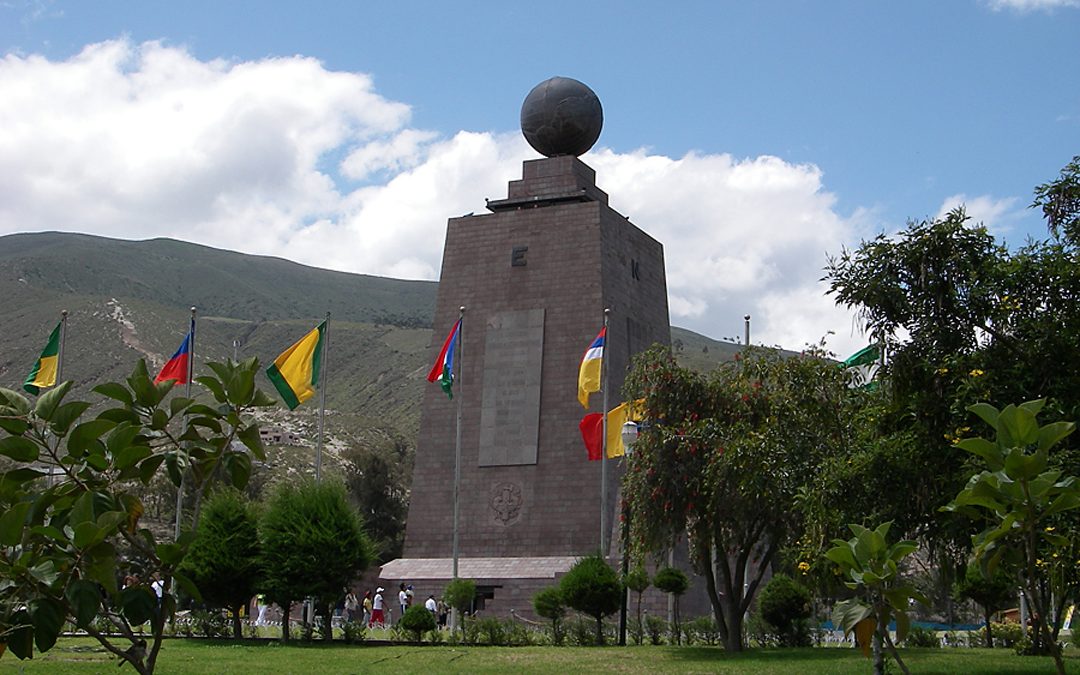 This next Ecuador installment is about our January 2007 visit to la Mitad del Mundo, the middle of the world, the Equator.

We stood on the equator on Sunday, both of them.

The bus ride from Gringolandia takes about 90 minutes and we only had to transfer once. On the second bus, Rolf gave up his seat to a young father holding a baby. Then Rolf moved to this wide bench near the front of the bus, and as he was approaching, the ticket-taker dusted it off for him. I’m not sure, but I think the ticket-taker appreciated Rolf giving up his seat. A bit later, Rolf asked the driver what CD was playing. (Rolf’s Spanish is muy useful.) The driver took the CD case, pulled out the insert and gave it to him. On the way home, Rolf found the CD for $1.50, the usual bootlegged price.

Now we are at the Equator. They have built a big monument with N-S-E-W markers. The monument contains an interesting museum about the many indigenous tribes in the country. It seems each river valley has its own unique tribe with its own unique language. Since there was no communication between the tribes, it’s easy to see how the Spaniards conquered them 500 years ago. Today, many of these tribes speak Quechua as well as their own language and many of the men speak Spanish for commerce. Some of the less civilized, very remote tribes only have their own language.

In the museum, we learn that in 1736, a bunch of French scientists figured out where the equator was and somewhere along the line the Ecuadorian government built this monument for tourism. Lots of little restaurants and souvenir shops grew around the monument, and now each Sunday, locals and tourists from all over the world visit the place to see the indigenous dancers and hear the bands. It’s an ongoing fiesta. 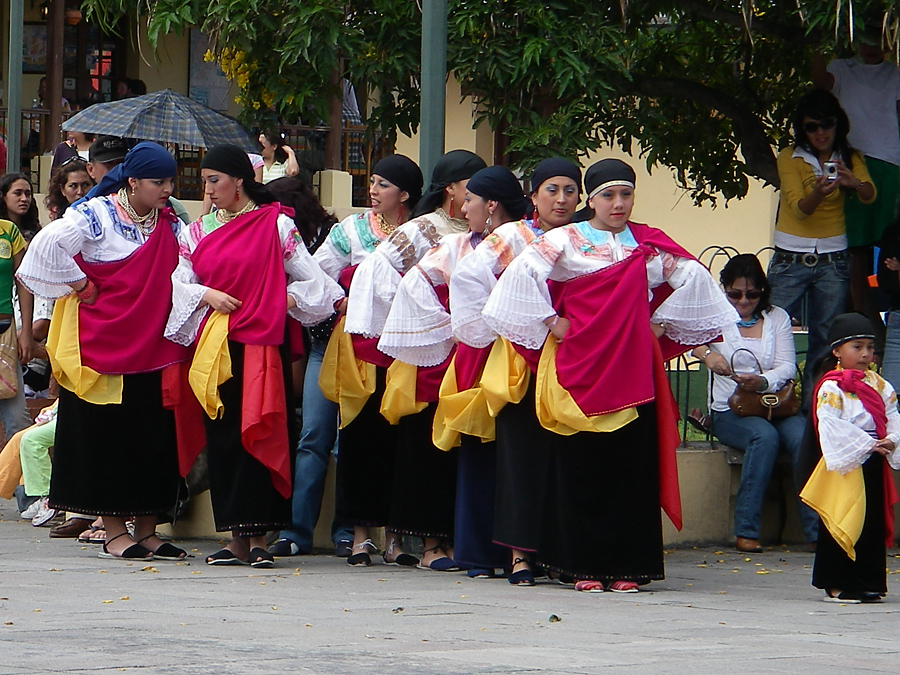 Now here’s the part about the fakery. Before our visit, one of the teachers at the school told us that the monument is built on a fake equator line. Apparently, a private person figured out that his house was on the “real” equator—as calculated using GPS. And now this place, called Inti-ñan — Camino del Sol, is running competition with the traditional place. We found it down a dirt path a short distance from the French calculation. At Inti-ñan, they claim that the French scientists got it wrong in 1736.

And they did get it wrong, but given their instruments, they were close. The monument is built 240 metres south of the true equator. 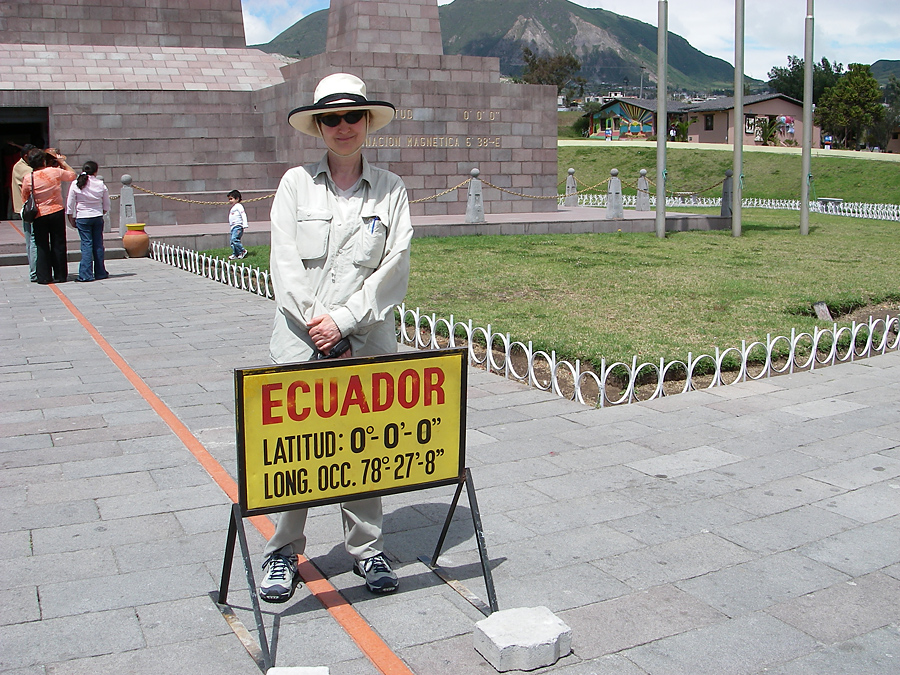 However, Inti-ñan is not on the true equator either, although the guides are happy to tell you otherwise! This place is still 130 metres south of the true equator but whoever is running Inti-ñan does a great job, even though this “real” equator stuff is a hoax. 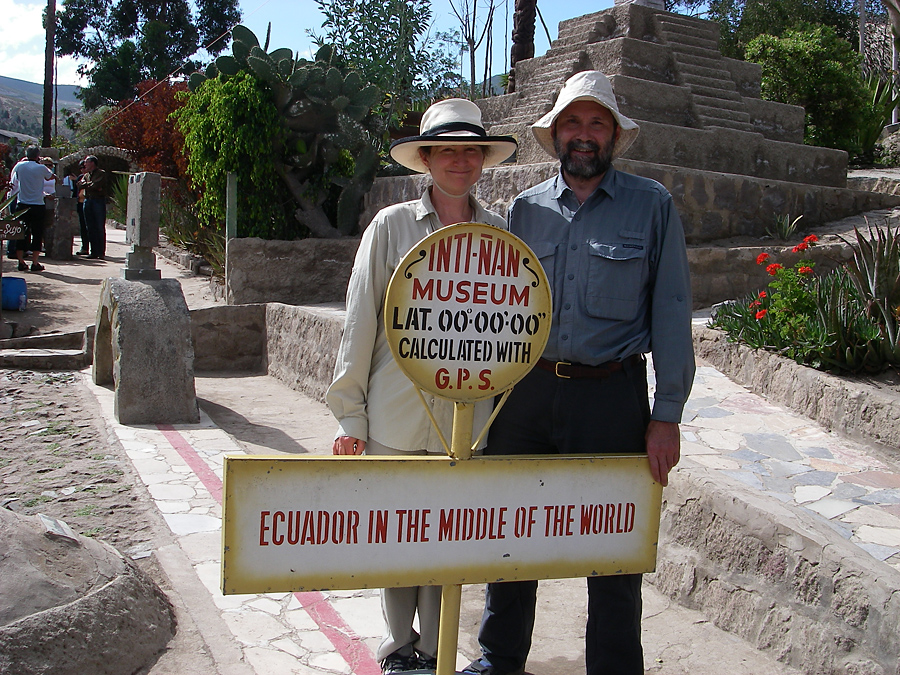 At any rate, on the day of our visit we bought into the hoax and thoroughly enjoyed ourselves. This miniature museum has its own collection of artifacts and the guides are excellent. Our guide was born in New Jersey and moved here with her parents when she was nine. She has a slight Spanish accent.

Her job is to show us all these “experiments”. That should have been my first clue. We are either on the equator or we are not and there is no need to “prove” it. And especially no need to prove it several times.

First, our guide tells us about the centrifugal force of the earth turning. She says that if you are right on the equator, the north and south forces cancel each other out. To demonstrate this, she takes a movable sink, puts it on the equator, fills it with water, puts the bucket under it, and pulls the plug. The water goes straight down. No swirling. Then she moves the sink six feet north, fills the sink again, and this time, it swirls counter-clockwise. (Much as a hurricane spins counter-clockwise in the northern hemisphere.) Move the sink to the south—only six feet away from the equator, and the water swirls clockwise.

The second experiment involves an egg. Our guide tells us that you can balance an egg (raw) on the head of a nail on the equator because the centrifugal forces are pulling equally on it. She does the balancing. It’s difficult, you need to be patient, and if you can do it, you get a certificate. Rolf does it, and he gets the certificate.

I don’t understand the third experiment. It’s called the resistance test. If you hold your hands locked over your head, and she tries to pull them down, she can’t. But when you stand on the equator, she can. Of course, she may be trying harder for the equator example.

We are also told that we weigh one kilo less at the equator because the earth bulges at its centre and so you are further from the gravitational force. However, like many weight loss programs, the effect is transitory.

The last thing she shows us is not an experiment, but an experience. You know how you can walk heel to toe with your arms out, and it’s, like, no big deal? Apparently, on the equator, a lot of people can’t. Because they sense (your inner ear senses) the centrifugal forces pulling. The more likely reason for this is the power of suggestion.

But I believed all this, and I wrote my son Kyle an email about it.

The next day Kyle wrote back:

In the latest email, you both told me about the swirling water on opposite sides of the equator. The theory behind that is called the Coriolis Effect. The Coriolis Effect works on the fact that because you’re further out from the centre of the earth on the equator you move faster than someone north or south of you because they are moving around a smaller radius.

Therefore if you were to throw an object straight north or south it would appear to curve in relation to the ground, but not enough that you could detect it.

The effect is very small and the swirling water effect is a trick.

If the water in the sink is spinning in one direction initially as it drains, the effect is amplified and you will see the water begin to spin in that direction. I read on a website about how they do that trick they showed you on the equator.

When they move the sink to the other side of the line (that could be anywhere, this trick even works in Canada) they rotate the sink in one direction or another. If the sink is not perfectly round, as they turn the sink, the water gets a little push in the direction they want it to spin. So if you were facing with your back to the line, then turned with the sink to your left in order to take it to the other side of the line, then the water would spin counter-clockwise when you took the plug out.

This is the site that explained it to me if you’re still confused.
http://www.ems.psu.edu/~fraser/Bad/BadCoriolis.html

As I read this website, I discovered I was not the only one being misled. It turns out there are lots of tourist traps around the world, that are near the equator, that claim to be the “real” equator. For example, Nanyuki, Kenya.

And so it looks like we got snookered but it is Such a good show, and I’m sure it provides some good business for the locals.

If you would like to see a picture of where the true equator is, this traveller has one of Latitude 0.00000