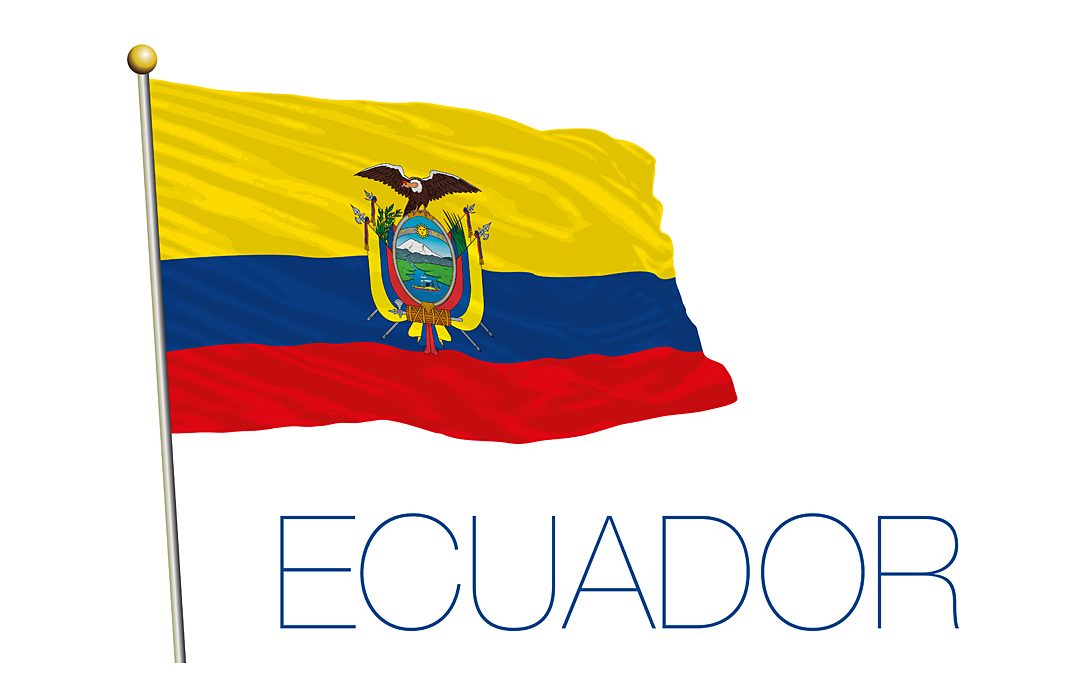 It’s time for another story from my 2007 Ecuador trip. Last time, I told you about The Jungle. After that adventure, we rested up in Quito for two nights. Then we boarded the bus for Cuena—it was supposed to be an eight-hour trip. 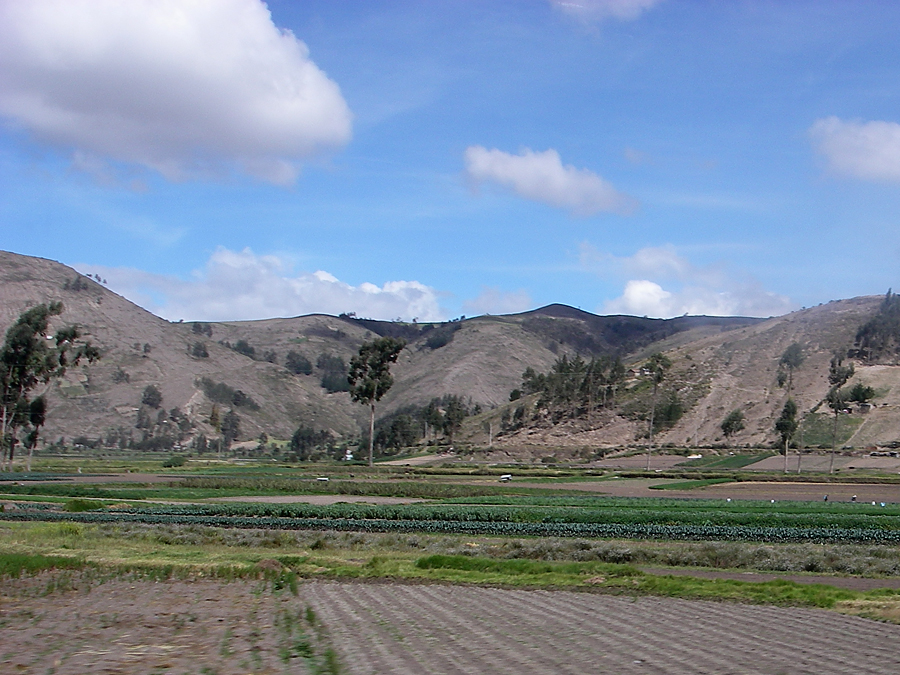 We are safely and comfortably in Cuenca for a few days. On Tuesday, we left Quito on the bus at 10 in the morning.

The tickets cost $10 each and we pay an extra 25 cents each as we go through the turnstile, for terminal tax. We load our packs, they seem secure because the driver has a key for the compartment and closes it right after our packs go in. But we do not get a receipt. (We recently met an American couple here in Cuenca who had a problem with the ‘no receipt’, as one of their bags never arrived. Without a receipt, they had nothing to show the police, so they had to settle for $250 to replace their year’s worth of clothing, shoes, sleeping bags, etc. But we are lucky, our packs arrive.)

Once we get the packs loaded, we go to the bathroom. The toilets don’t have seats but they are clean, and toilet paper only costs 15 cents.

The bus leaves on time at 10 and as we are pulling out of the terminal, a young man walks through selling litre bottles of yogurt, followed by another guy selling bottles of water. Sort of like an omen that we will be here for a long time. Then the first sales presentation starts.

The place where the driver sits is separated from the rest of the bus. There is a glass divider and a door, and an orange curtain behind the glass divider so you can’t see where you are going. This might be intentional, so you cannot see where you are going on those narrow mountain passes. You probably don’t want to know. But for me this is a problem, because I can’t keep my eyes on the horizon. I am sitting by the window so I get a peripheral view, which is not as good as looking straight ahead.

On the glass divider there is advertising about how this bus “Sucre Express” has music, DVD, baño, and is safe and punctual. There is also a sketch in red lines of Jesus with a crown of thorns – with the red lines contrasting against the orange curtain. Sort of like, if you think You are suffering, consider how Jesus felt . . .

The sales presentation continues. I think the guy is selling ginseng. Costs $4.50 in stores, but for you, because he cares so much, it’s only $2.00 a bottle. He believes in it so much he would give it to you for free but he can’t. There is a magic demonstration where he adds “toxins” to a glass of pure water to represent the coffee, alcohol and fast foods that go into our bodies, and then he adds a magic pill and the brown water changes to clear. It might have been more effective if he had drank the water after, but he throws it out the window.

He lets people hold the bottles of pills. No obligation. And he points out the writing on the bottles, how this is a prestigious laboratory, how the bottles are hermetically sealed, etc. Then he collects the bottles back and – the most amazing part – some of the people purchase them.

An hour into the trip, Rolf has to pee. The door to the baño is locked so he goes to the front and knocks on that door. The driver has a helper who has the key. But the helper says that the baño is only for the señoras. Rolf disagrees and he gets to use the toilet. I use it too. Very tricky on these bumpy, winding roads. Of course, there is no water to wash your hands but I have my little bottle of alcohol cleanser. I can’t help it, I’m a nurse. I’m sure the locals think I am loco. Or is it locA?

At Latacunga, two ladies in red shirts and caps board, carrying Tupperware containers of helados for 50 cents each. Homemade ice cream on a stick wrapped in a baggie. I get coconut, which tastes very good and the cold helps with the nausea. It would be better if I could see straight ahead but that only gives me the orange curtain and the suffering Jesus.

New passengers have boarded, and now another guy does another sales spiel on ginseng. He competes with the scratchy music from the loud speakers. He finishes and makes a few sales.

We stop somewhere. Quien sabe? The driver says 15 minutos and disappears. I decide to use the bus stop’s bathroom.

Bathrooms in this country are a special experience. I carry my own toilet paper. Use some to wipe the toilet seat – this place has a toilet seat, and it is wet. These toilets do not flush but there is a barrel of dark water with a plastic jug floating in it. I think the idea is to dump water in the toilet to ‘flush’ it – which is why the seat was wet before. I only peed, so I don’t worry about it, and besides, I just don’t want to reach in that barrel. Of course there is no water to wash your hands, but I pour a good dose of alcohol on my palms and rub for 15 seconds.

Meanwhile Rolf is grabbing a bowl of soup at a restaurant, which has a clean bathroom (he later told me) and even running water. However, he was sick the next day, so who knows about the soup. It’s about 2 pm, and so far I have only eaten that ice cream so I buy a sealed little package of Ritz-like crackers. Which are good for the nausea. I return to the bus, since the 15 minutes is up. And I wonder where the driver is. The motor is still running.

I get a window open for air. We are the only turistas on this bus and the locals don’t like anything bordering on cool. I sit by the window and sip water and air. And watch out the window.

The median in the road has an overflowing barrel of trash. A lactating dog crosses the road to the barrel, puts her paws on the top of the barrel, and searches. She finds a neatly tied green garbage bag, removes it, and carries it down the median. Then she sits down with her lunch between her paws and rips open the bag. She finds a takeout Styrofoam tray which seems to have a good meal left because she is eating for a long time. Then the tray blows away along with the rest of the bag’s contents. The trip continues. There is a third sales presentation.

About 3:20, the bus pulls to the side of the road and the driver and his helper get out, followed by just about every male passenger, including Rolf. I hear someone say “peligroso” – dangerous. I get out too, with my daypack – never leave anything behind.

We stand on a cliff and look at the blocked road below. The men are dispersing, peeing on various bushes. Women are out of the bus too. Many wear the indigenous uniform – hat, frilly knee-length skirt, colourful shawls. One is knitting.

The decision is made to drive to the blockade. Everybody runs back to the bus with the same enthusiasm as if we are off to swim at the lake on a hot day. 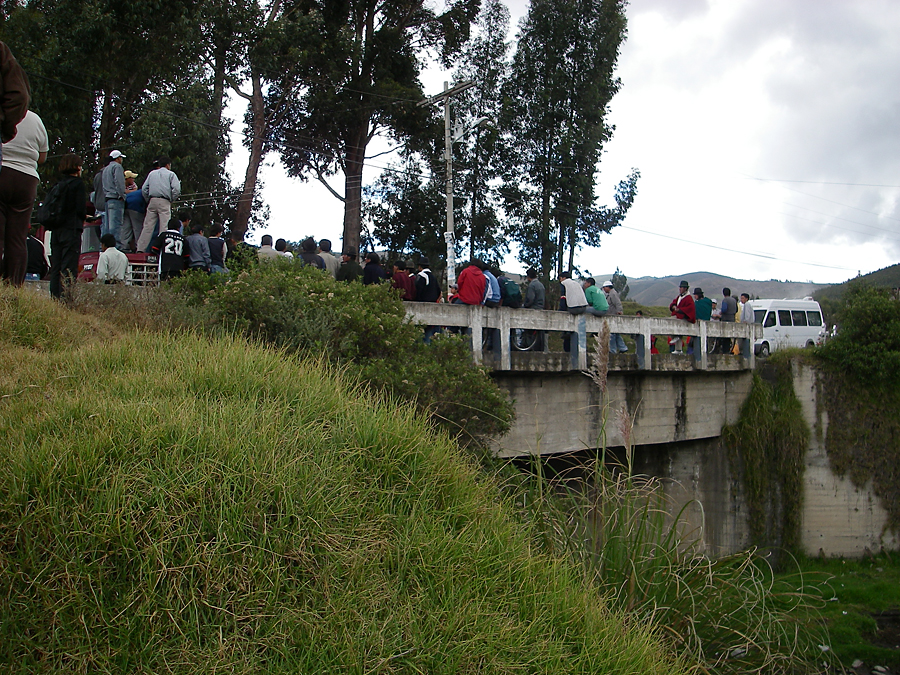 At this point, some guy comes through the bus selling banana chips. A good sales opportunity.

There are no police or military but the media is there, with two cameras. Rolf talks with one of the other passengers, a metizo (not Spanish, not indigenous, a mix). We meet a lady from a different bus, Susan, from Vancouver. She has actually worked with a Belgian volunteer project at this pueblo and she tells us about the poverty here. The children get fed once a day, at breakfast, some boiled gruel. She ate the same gruel, got sick and left, and now she is touring. The volunteer project was teaching English and Computers, if you can believe it. The place actually has a computer, except it doesn’t work. They teach concepts on a white board – another story. 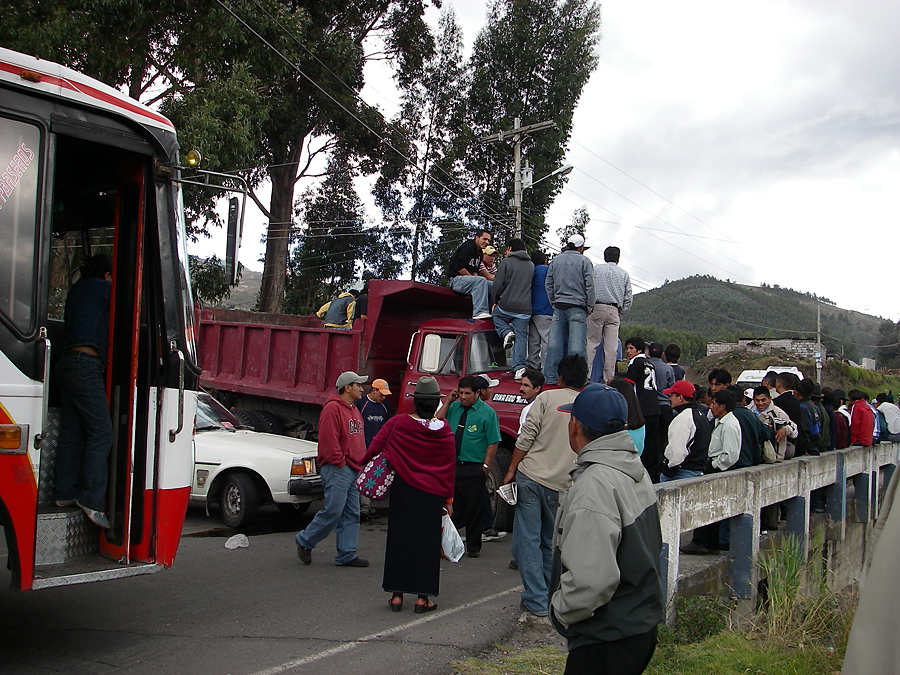 Nothing happens for about an hour and a half – except the men are crawling all over the truck and seem to be enjoying the diversion.  There is no leadership. Or at least no one is taking charge. There are several buses in the building line-up of traffic. They seem to be waiting for the police to arrive, maybe. They do try rocking the truck, with about 30 men pushing. But the tires don’t roll.

Eventually, some guy gets an idea. I see him go under the truck and he is pulling some lines. I was afraid they might be fuel lines, and that he was going to blow up the truck, but what do I know? I tend to get paranoid around crowds. But then Rolf figured out that the guy was disconnecting the brake lines. And now the truck, even with the flat front tires, can roll.

The indigenous who have been monitoring our progress, now start to place rocks in front of the tires. Rolf crawls under the truck, removes a rock and tosses it in the river. This makes the travellers happy. There is renewed effort to push the truck to the side. And, amazingly, all of this is happening without anyone in charge. 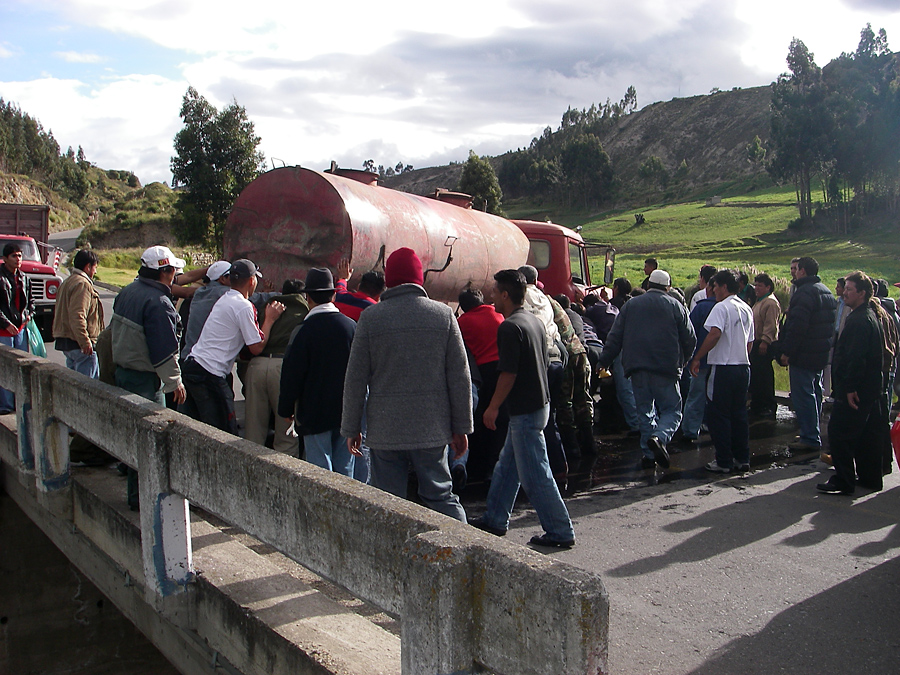 As soon as the truck is almost clear to move off the bridge, another vehicle starts to crowd forward – to be the first one across. However a bus at the front, needs to back up, just a bit, to allow room for the blocking truck to be moved. The people seem to figure this out, and then they are backing up vehicles.

Thirty men, including Rolf, are pushing the truck to the side, and then there is room to cross the bridge.

During this time, the indigenous are peaceful, throwing water and not rocks.

We get through the pueblo, to the next blockade. Our bus’s men pile out, move the next truck and we are on our way. It is about 5 o’clock, there is another hour or so of daylight. The scenery is pretty, if you like rolling green hills that make me think of Ireland. But the effect is somewhat marred by the roadside garbage, with the dogs rooting through it.

After dark, about 6:30, it is rainy and foggy, and I don’t get to see much of the Incredible Scenery. I do see, out my window, the muddy gravel road, and I hear the blare of horns as buses meet each other on said road.

And I feel about as sick as I have ever felt with nausea. At 9 pm, we arrive in Cuenca, find a very nice hotel, and I swear off buses for life.

Except I have to get on another one tomorrow. I’m not sure I can do it. I may be stuck in Cuenca forever.

s :o)
who now remembers that there is such a thing as Transderm V for motion sickness – but you can’t buy it in Ecuador.