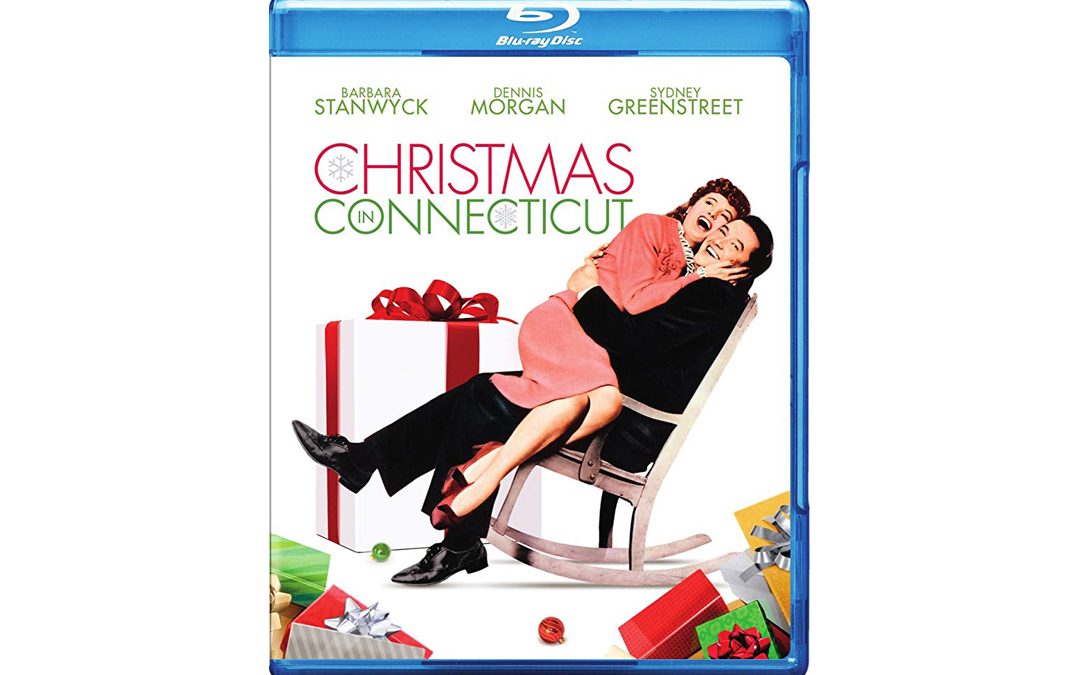 Rolf found this movie at the library. He’d heard it was coming out in the Blu Ray version so he wanted to see if it was worth adding to his Christmas collection.

The movie was made in 1945, a time of rotary phones and lots of smoking. Patients even smoked in the hospital, but only the men. Funny how those things stand out now. And I wonder, does everyone even know what a rotary phone is? But let me tell you about the premise.

Elizabeth Lane is a writer with a housekeeping column for a prestigious magazine. In her column, she not only writes about her excellent recipes but she also tells about her idyllic life on the farm in Connecticut with her husband and baby.

Of course, it’s all fiction. She is supporting herself with the lies she writes about. As any fiction writer does. And she is doing well, well enough to afford a mink coat.

This Cinderella has a fairy godfather in the person of Uncle Felix – a chef from Budapest who now runs Felix’s Restaurant in America. Elizabeth gets her recipes from him, and he is very protective of her. He is also full of witticisms like “Nobody needs a mink coat but a mink.” He may have been an early proponent of the anti-fur movement.

As long as the public goes on thinking the Connecticut farm myth is true, all is well.

The film starts off with the sinking of a ship in WWII, and two survivors in a lifeboat. One of them dreams of eating wonderful food in a five-star restaurant. Finally, they are rescued, and the hero, Jefferson Jones, is put on a soft diet since he’s been starving for eighteen days. His sailor friend suggests he woo a nurse to get more substantial food. He goes so far as to propose to the nurse, who is the cliché dumb blonde.

At any rate, blondie decides it would be a good idea for Jeff to experience life in a real home, so that he will realize what a good thing a home is, and then he will marry her. So she writes to Mr. Yardley, the owner of Elizabeth’s magazine. The nurse had taken care of Mr. Yardley’s little granddaughter, nursing the child back to health after a bout of the measles.

Remember measles? And now we have the MMR vaccine.  I grew up without the vaccine and experienced measles in full force. But I digress.

The nurse asks Mr. Yardley to arrange for Jeff, the war hero, to spend Christmas at Elizabeth Lane’s farm.

Elizabeth’s editor Dudley is distressed. If the owner Yardley discovers she is a sham, not only will Elizabeth lose her job, but so will Dudley.

The gig is up. Elizabeth is at Uncle Felix’s restaurant, lamenting, “Where will I get a farm? I don’t even have a window box?”

Enter John Sloan, the architect, the man who owns the farm which provides the inspiration for the fictional Elizabeth, and the man who wants to marry her.

“You know you need someone to look after you,” he tells her. She always refuses since she does not love him. He says she will learn to love him, and since she will no longer have a job, now she can’t say her career is the reason. Out of excuses, she agrees to marry him.

Felix thinks this is a catastrophe.

Now Elizabeth must confess to Yardley that her column is fiction.

Yardley is overpowering and won’t let her get a word in. (Later, at the close of the story, she will make herself heard.)

For now, he tells her that her column is the only one he actually reads and that circulation will benefit if she entertains this American hero by inviting him to the perfect Christmas on the perfect farm. In fact, since Mr. Yardley’s daughter and granddaughter are busy elsewhere working for the war effort, he will attend himself. And the magazine will pay her a bonus.

For Elizabeth, the deciding factor is that her editor will not lose his job, and his children will be able to have presents this Christmas.

At the first turning point, thirty minutes into the film, Elizabeth has decided to get married and the Judge will perform the ceremony as soon as they arrive at the farm. Elizabeth has also convinced Sloan to continue the masquerade with Mr. Yardley and the sailor in order to save her editor’s job.

Now she has a farm and a “husband” and he, as a man with an eye for detail, has even provided the “baby”. His Irish housekeeper Nora watches the baby for a woman who works at the factory. (This is wartime and women worked at the factories.)

It’s apparent this will not be a match made in heaven. Sloan is more interested in his architectural design and loves to talk about it. At any time.

“When you’re kissing me don’t talk about plumbing,” Elizabeth tells him, hopefully. He asks what he should talk about. She suggests maybe he shouldn’t talk.

Felix accompanies Elizabeth to the farm. A bit of rivalry sets up in the kitchen. Nora the housekeeper is quite happy with her Irish Stew. Felix adds paprika. Now it is goulash.

Sloan is anxious to get the ceremony over with. Felix stalls, claiming they need music. And sure enough the sailor shows up two hours early.

The ceremony keeps getting interrupted as Elizabeth and Jeff get to know each other. He tells her she is “the swellest person I ever met”.  I love these out-of-date lines.

And of course, Jeff is our hero so he would never kiss a married woman.

The movie is full of clichés, but they seem to work in this 1945 setting. Perhaps this is where the clichés originally came from. Regardless, this is a movie of traditional Christmas charm right down to the horse drawn sleighs.

Felix is delightful. Elizabeth is a woman ahead of her time, although after finding true love, it seems she will quit her job. I will pretend that after the credits roll that does not happen and she still gets to write.

Have you watched this movie? What did you think? Have you ever had the measles?