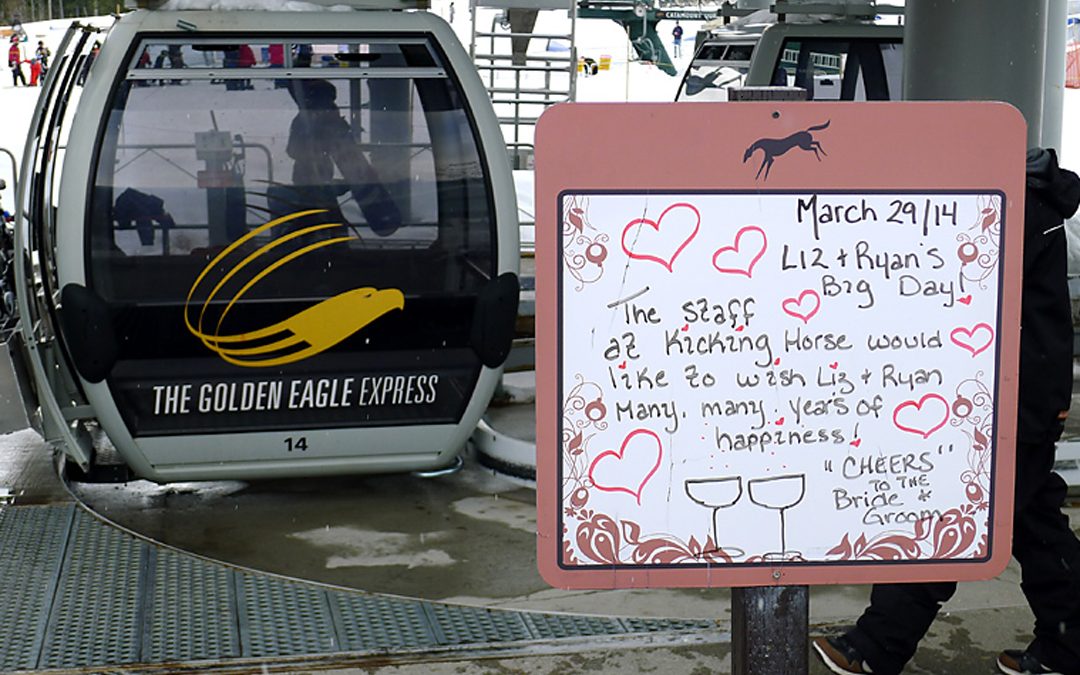 Yesterday, Rolf and I returned from Kicking Horse Mountain Resort in Golden, British Columbia. On Saturday, March 29, 2014, our son Ryan married Liz at the top of the mountain.

And what a celebration!

It began on Thursday. Ryan and Liz and their Labradoodle Makita drove from Calgary in their truck. Liz’s parents, Bill & Tina, flew in the previous night from Ontario and they drove from Calgary at the same time. Rolf and I were about ten minutes behind them. The six of us met in Banff for lunch at the Keg and then we continued to Golden.

At Kicking Horse, Ryan and Liz booked a pet-friendly room in the Glacier Lodge at the base of the mountain. Rolf and I were in the room across from them so we could help with walking Makita.

When I wasn’t skiing or talking to relatives, I actually did a bit of writing and Rolf brought me lattes from the Double Black Café in the bottom of our building.

A ten-minute walk from the base, Bill and Tina rented a chalet to house four families. The huge kitchen and family room became Meeting Central. And this is where family members were treated to a pasta dinner on Thursday night.

Rolf and I only skied on the Friday but everyone else got in lots of runs. Here’s the thing about Kicking Horse. The mountain is so big you can have three weather systems on it. The top was clear on Friday, but on my way down, I had to pass through cloud. 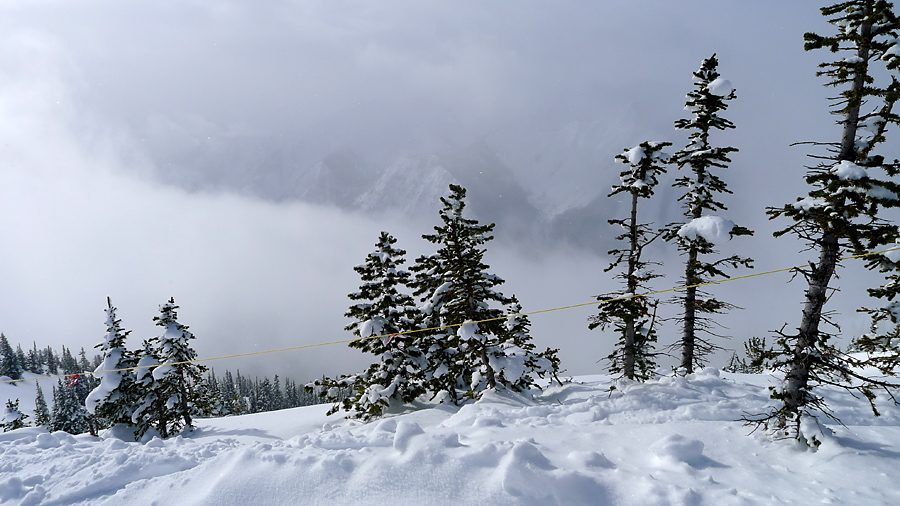 Then I reached a sunshiny bottom and I had a chicken club on gluten free at the Peaks Grill.

Friday night, we brought in pizza for the rehearsal dinner at Bill and Tina’s chalet, and we met even more relatives.

In the morning, Rolf was in charge of taking Makita for a long walk. Since she was not allowed up the gondola, we wanted to make sure she was plenty tired while she stayed alone in her room at the base.

About 2 pm the groomsmen met in Ryan’s room to get spiffy in their tuxedos and read the instructions for tying their fancy bow ties.

I met Tina (Liz’s mom) at the gondola base and helped to carry up the flowers. We rode up with some skiers and snowboarders and talked about the wedding.
One of the boarders held a box of flowers for me so I could get off easier. Then Tina and I brought the flowers to the Eagle’s Eye Restaurant and upstairs to the bridal suite where the bride and her bridesmaids were busy doing hair and makeup. 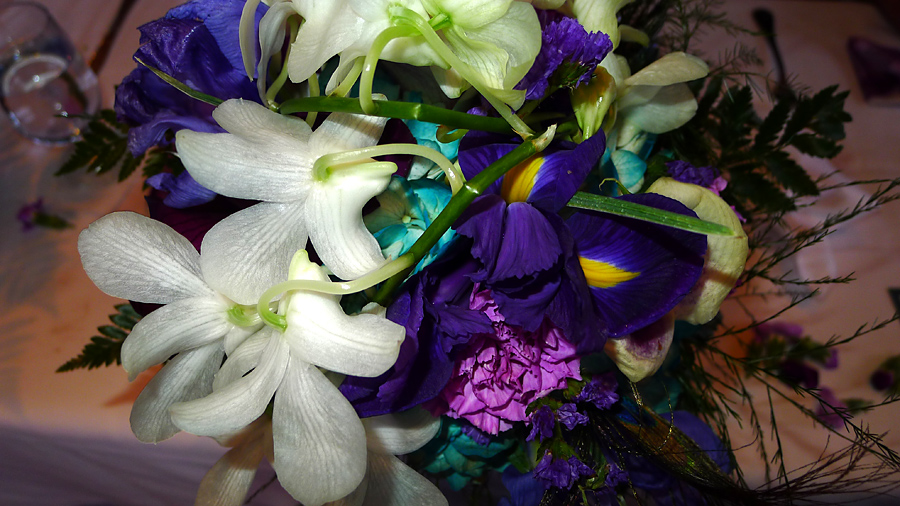 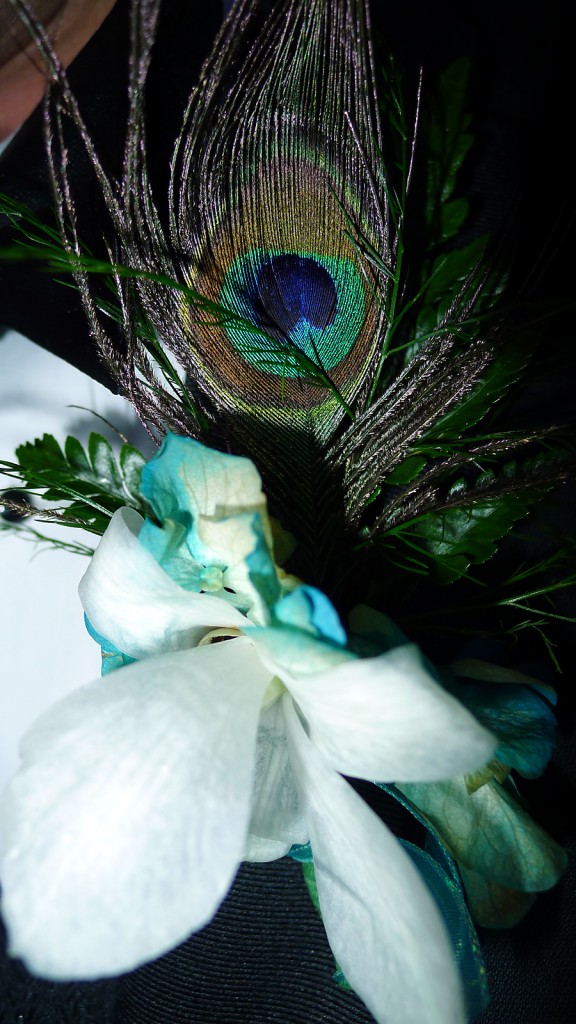 As I was returning to our suite, I met one of the groomsmen, James, heading to Ryan’s suite. He was with his wife Chelsea and daughter Catherine. Chelsea and Catherine got ready in my suite. My other son, Kyle, was also a groomsman. His girlfriend Carol joined me and the other girls in our suite.

Rolf and I, and Carol and Chelsea and Catherine went up ahead of the groom and groomsmen. I wore Mukluks while I was outside and carried up my dancing shoes for inside. The bride had white Mukluks. 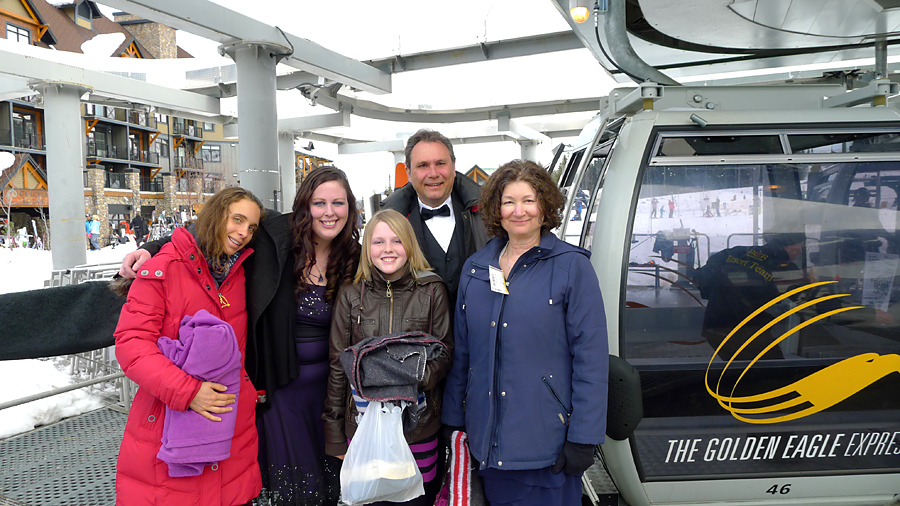 Here we are boarding the gondola.

The Golden Eagle Express Gondola carries eight passengers 4000 feet up, for a length of 11,266 feet. It takes just twelve minutes and the wedding guests get blankets. 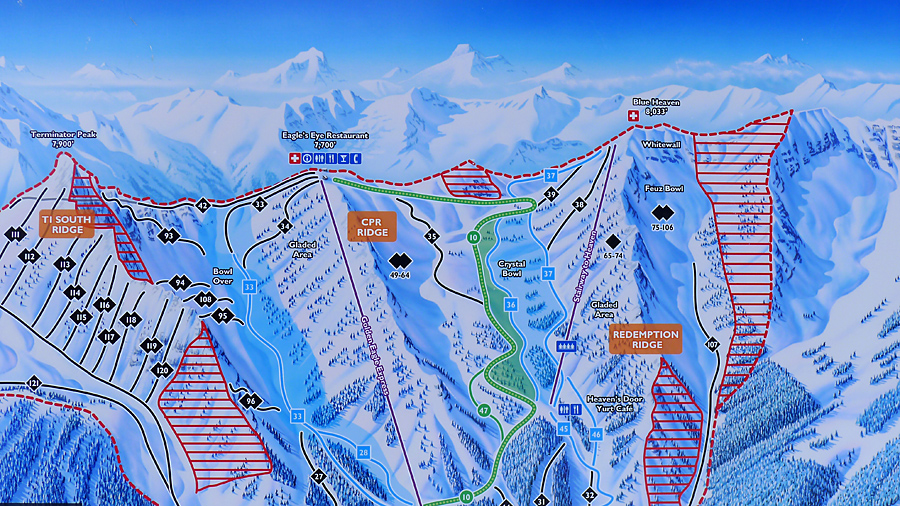 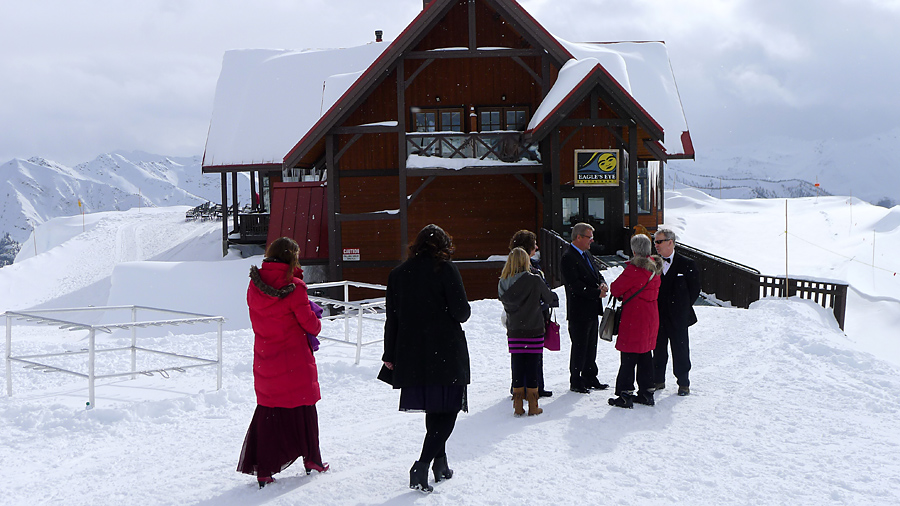 While we were waiting for the others, we watched the staff putting the final touches on the reception room and setting chairs outside in the snow. You can see the chairs behind the restaurant, on the left side of the photo.

The groom and his groomsmen rode up the gondola about 4:30. The guests came up about 5 pm. Once everyone was at the top, the gondola stopped running.
The staff gave everyone hot chocolate or coffee with Baileys to take outside and the groomsmen ushered everyone to their seats.

Claire from Dibble Photography was everywhere. She did a great job of capturing memories.

We were fortunate to have two meteorologists in the group who arranged for a break in the clouds for the ceremony. The sun was out, with a bit of overcast and there were a few snowflakes in the air.

At 5:30 pm, Andy officiated and gave us a beautiful ceremony with some light moments. 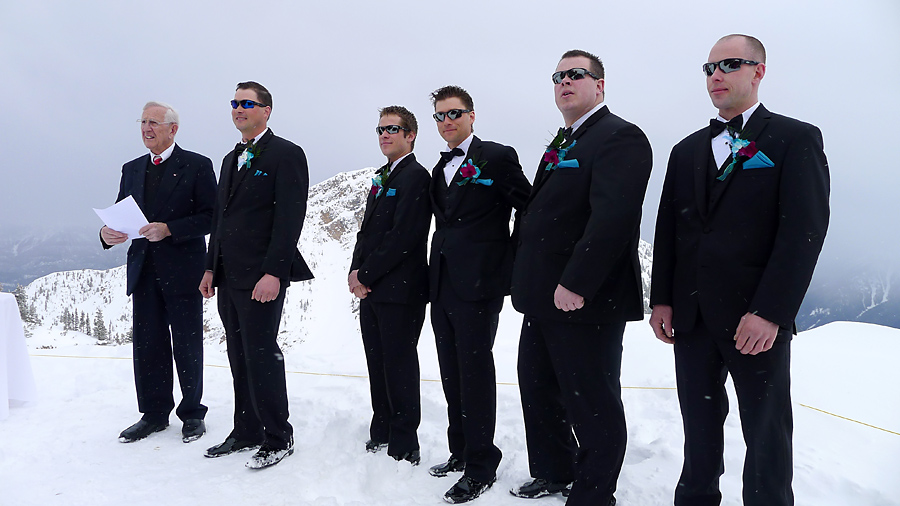 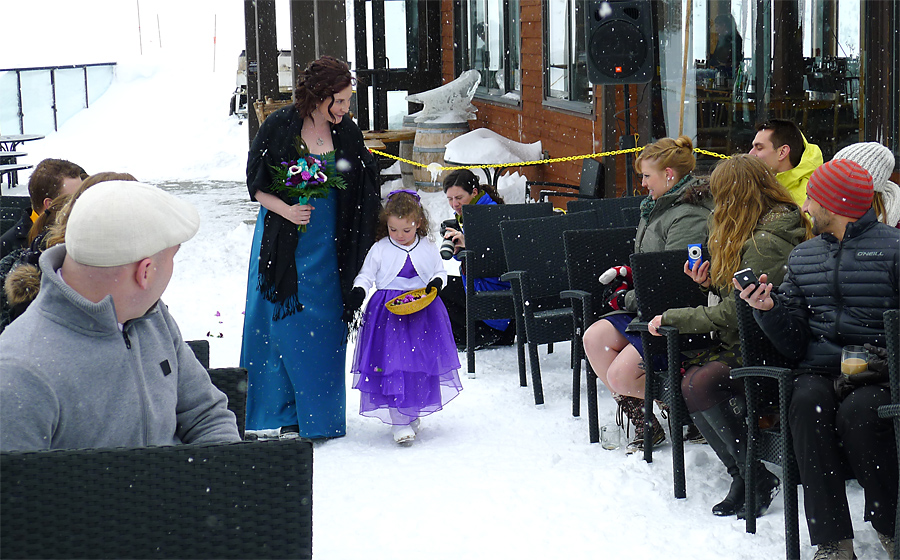 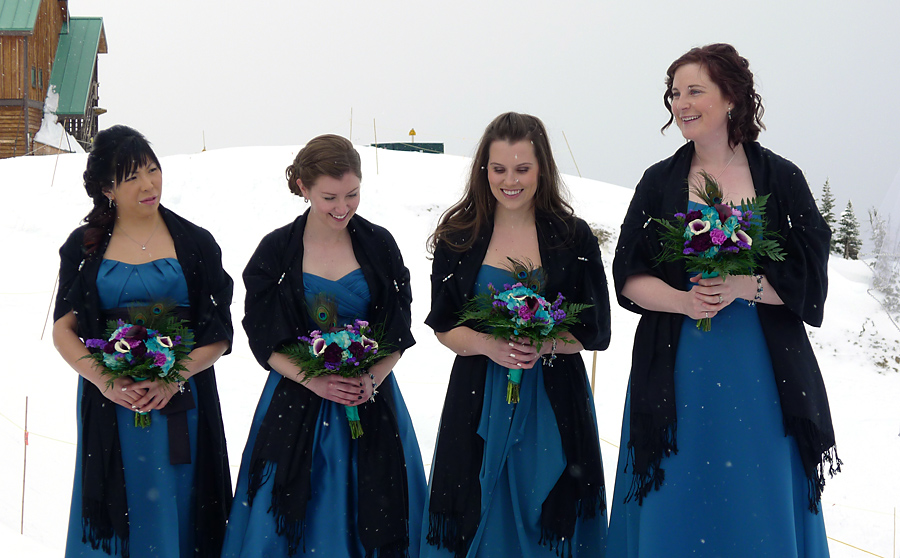 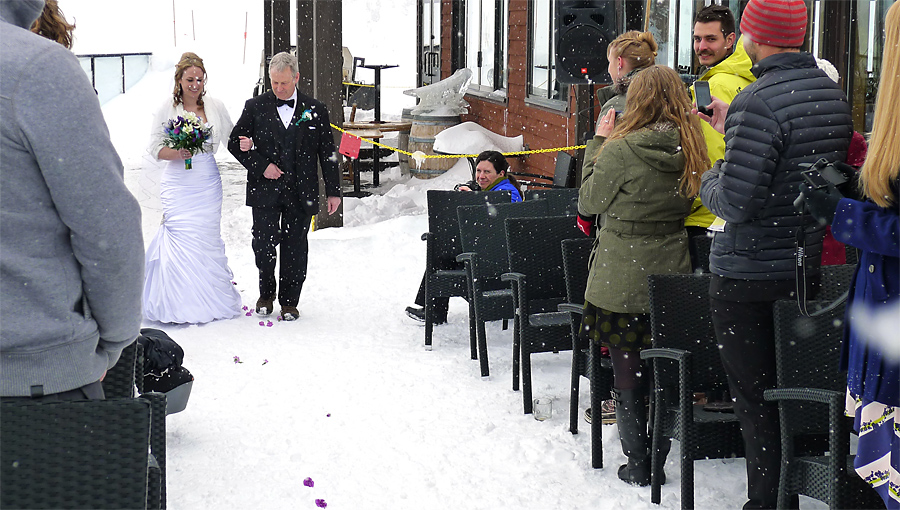 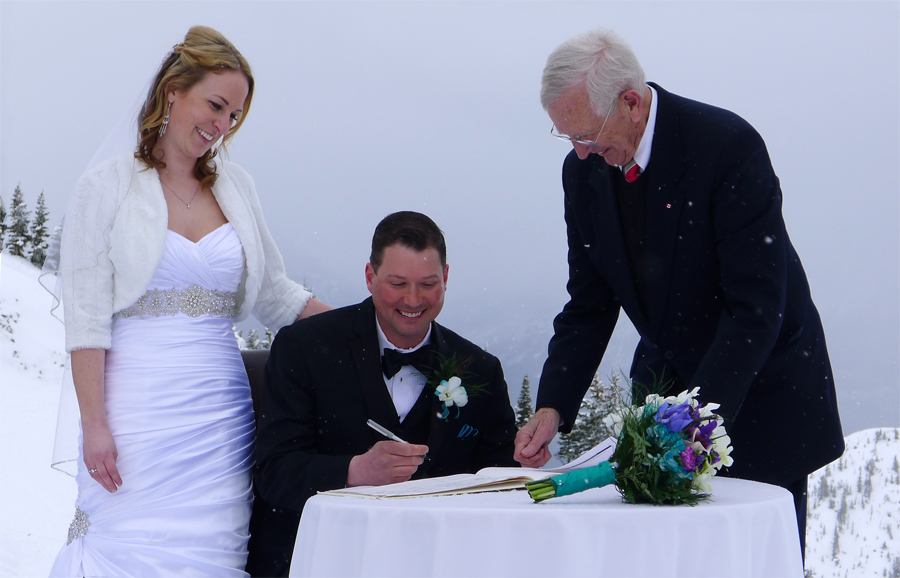 While the wedding photos happened on the other side of the Eagle’s Eye, guests were treated to cocktails and canapés, and a slide show of Ryan and Liz from the time they were babies up to the present. It was surprising how many activities they shared before they even met.

From 7 to 8:30, we had dinner and toasts and many funny stories. Tables were named after trails at Kicking Horse. Rolf and I sat at Northern Lights with the bride’s parents.

Instead of a wedding cake, a caterer from town, Pretty Flour, made a tower of these cupcakes. 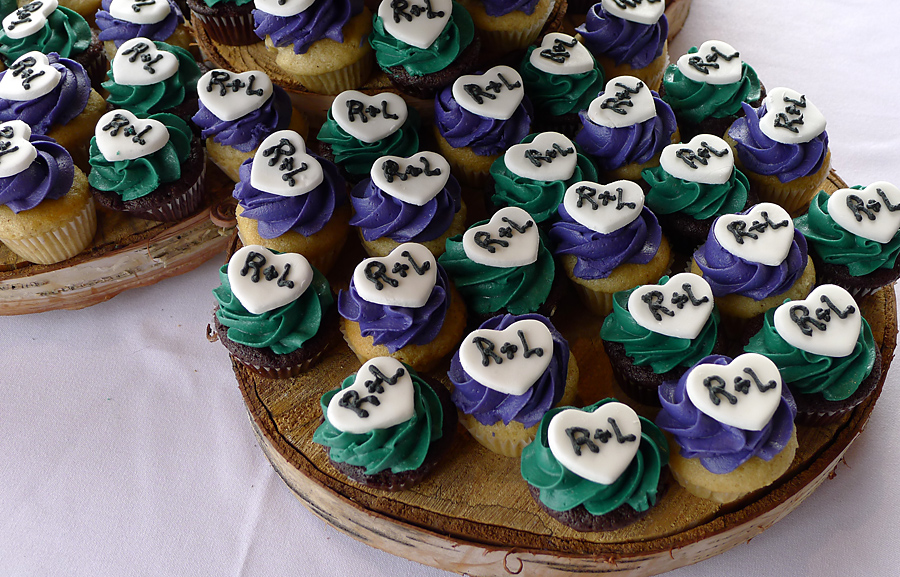 Ryan and Liz had their first dance, a choreographed dance, and their song is:

Here are the opening lyrics:

I’ll be your dream, I’ll be your wish, I’ll be your fantasy.
I’ll be your hope, I’ll be your love, be everything that you need.
I love you more with every breath, truly madly deeply do.
I will be strong, I will be faithful ’cause I’m counting on a new beginning.
A reason for living. A deeper meaning.

I want to stand with you on a mountain.

And so it goes. Listen to it here.

The DJ completely understood the needs of the crowd, playing some favourites for the older guests early in the evening and moving into a pounding tribal beat as the night progressed.

When she brought up the lights at 12:30, there was a collective ohhhhhhh. So she dimmed the lights again and played one more song.

Here is one more photo: this one is of my other son, Kyle. 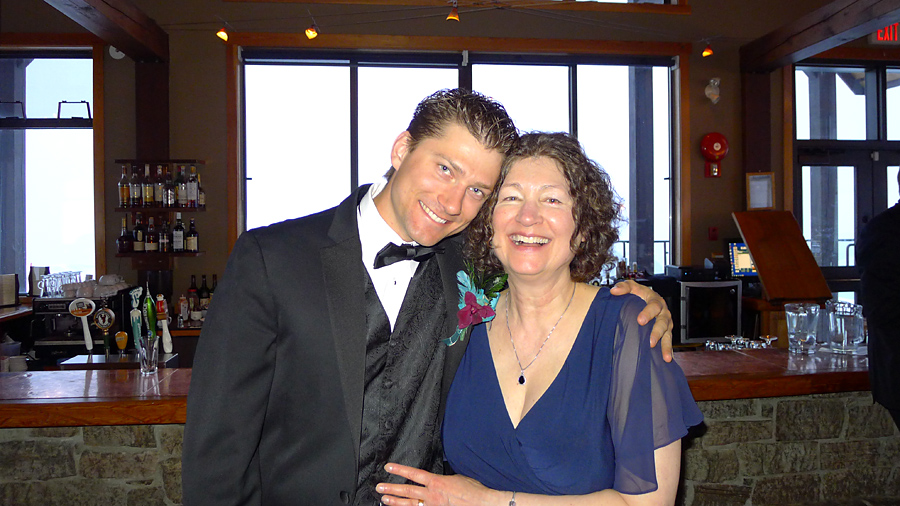 For the trip down the gondola, the liftie gave us blankets and set a flashing red beacon in the cabin. This alerts the liftie at the bottom that the cabin has passengers. It was snowing, making powder for the morning, and we could barely see the outline of the trees as the gondola glided down the mountain.

Ryan & Liz spent the night at the top of the mountain in the bridal suite. They had their own chef who brought them breakfast in the morning and their own butler who arranged for their wedding clothes to be brought down. After breakfast, Ryan and Liz snowboarded and skied down the mountain in fresh powder.

Rolf walked with Makita up the slopes of the Catamount Chair again. Then we joined the rest of the family for the after-wedding brunch at Bill and Tina’s chalet. And then finally, on Sunday evening, a few of the family members had a pasta and salad supper. After that, we took Makita for another walk on the ski hill. We made our goodbyes Sunday night.

Monday morning after another Makita walk, we said goodbye to the new Mr. and Mrs. Stengl and headed back to Calgary. The official photos will be ready in a couple of weeks. These are a few of my own photos and we’re all looking forward to sharing our pictures and memories via Dropbox.

Thank you to everyone who made this event so happy and memorable.